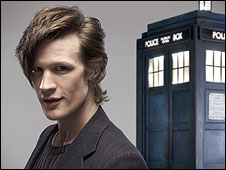 Matt Smith has been named as the actor who will take over from David Tennant in Doctor Who - making him the youngest actor to take on the role.

At 26, Smith is three years younger than Peter Davison when he signed up to play the fifth Doctor in 1981.

Smith will first appear on TV screens as the 11th Doctor in 2010.

He was cast over Christmas and will begin filming for the fifth series of Doctor Who in the summer. Tennant is filming four specials in 2009.

Smith was named as Tennant's replacement in Saturday's edition of Doctor Who Confidential on BBC One.

The programme was watched by an audience of 6.9 million people at its peak, according to official overnight figures.

The actor said: "I feel proud and honoured to have been given this opportunity to join a team of people that has worked so tirelessly to make the show so thrilling.

"David Tennant has made the role his own, brilliantly, with grace, talent and persistent dedication. I hope to learn from the standards set by him.

"The challenge for me is to do justice to the show's illustrious past, my predecessors, and most importantly, to those who watch it. I really cannot wait."

Piers Wenger, head of drama at BBC Wales, said that as soon as he had seen Smith's audition he "knew he was the one".

"It was abundantly clear that he had that 'Doctor-ness' about him," he said. "You are either the Doctor or you are not. It's just the beginning of the journey for Matt.

"With Steven Moffat's scripts and the expertise of the production team in Cardiff behind him, there is no one more perfect to be taking the Tardis to exciting new futures when the series returns in 2010."

Wenger said a broad range of people had been auditioned, but they had not set out to cast the youngest Doctor.

Smith's TV debut was in the 2006 adaptation of Philip Pullman's The Ruby in the Smoke, which starred former Doctor Who companion Billie Piper as Sally Lockhart.

He has also acted opposite Piper in the follow-up, The Shadow in the North, and in ITV2's Secret Diary of a Call Girl.

In 2007, he had a leading role in BBC Two's political drama Party Animals, in which he played a parliamentary researcher.

Smith's stage work has included stints with theatre companies such as the Royal Court and National Theatre. His West End debut was in Swimming With Sharks opposite Christian Slater.

He was born in Northampton in 1982 and studied drama and creative writing at the University of East Anglia.

Tennant said in October that he would stand down from the show after filming four special episodes in 2009.

The star is due to begin shooting the first special this month, just weeks after surgery on his back forced him to pull out of a London run of Hamlet. The last of these special episodes is expected to run in early 2010.

With a new creative team in place for the 2010 series led by executive producers Steven Moffat and Piers Wenger, the casting of the Doctor was the first job to be completed before scripts could be finalised.

Doctor Who began in 1963, and seven actors played the Doctor before the show was dropped in 1989.

After a TV movie in 1996 - starring Paul McGann - the TV series returned in 2005 with Christopher Eccleston in the lead role. Tennant took over the same year.
BBC News [/b]
Click to expand...

Dumb move. To have had the new doctor being a surprise would have been a ratings winner (especially as no-doubt at all, ITV will put some pop idol rubbish on TV at the same time - Remember the one foot in the grave/who wants to be a millioniare battle, when ITV rigged the results?)

In other news, who the f*** is Matt Smith and isn't he an ugly bugger!
S

Old boy of my school. Who'd have thought. Presented some stuff at an awards evening a few months back which my brother went to. I bet getting to shake his hand has just become a whole lot more exciting for year 7-9 kids.
A

YEAH, I NEED ONE MORE JOB (PLUS TWO OLD MINE)

Is 'open' killing the Android?