THE Brisbane Lions are intent on securing two Irish recruits before the end of this month's International Rules series in a bid to bolster their playing ranks while exploiting a loophole within the AFL salary cap rules.

Irish international Sean Cavanagh, a midfielder with this year's All-Ireland champion County Tyrone, has been offered a two-year contract to join Brisbane next season as an "international rookie", while County Down captain James Colgan and forward Martin Clarke have also held negotiations.

Under provisions for international rookies, AFL clubs can secure up to two players from non-AFL backgrounds. There are no limits on what international recruits can be paid as their contracts fall outside the salary cap.

The rarely used provision has immediate appeal for Brisbane, which has publicly admitted it will be forced to shed senior players to squeeze under next year's salary cap. Following lobbying from Melbourne-based clubs, the AFL will have phased out Brisbane's 10 per cent retention allowance by the end of the 2007 season.

Brisbane also has the advantage of being able to take up to nine players on its rookie list under an AFL program designed to fast-track the development of Queensland-born players. This would allow the cash-rich club to invest in two Irish recruits at little risk.

Brisbane is not alone in scouring the Irish counties for talent, much to the chagrin of the GAA, the governing body for Gaelic football.

Cavanagh had initial discussions with Allan and Brisbane chief executive Michael Bowers during an earlier Ireland trip in July. It is understood that Cavanagh's partner was working in Brisbane as recently as August.

In an interview with the Irish Independent, Cavanagh this week confirmed he had been offered a contract. "There is a contract on the table and I have to make my decision before the end of the International Rules series," Cavanagh said.

"I have been offered a contract for a couple of years and I have a lot to weigh up. I have to see if it would suit me to make the transformation. I'm not too sure if my game would be suited to Aussie Rules. But there is a feeling that I have been successful in the GAA and could try my lot in the AFL now."

If Cavanagh accepts to follow the path of Jim Stynes, Tadgh Kennelly and more recently, Carlton's hurling-playing O'hAilpin brothers into the AFL, he will represent a different kind of Irish recruit.

Whereas Stynes and Kennelly were taken as teenagers - prompting the GAA and AFL to agree on a no-poaching rule during under-17 International Rules series - Cavanagh is 22, a two-time All-Ireland medallist and an established Gaelic football star.

Yet the inherent risks of an attempted switch of codes are not lost on Cavanagh, who is part of a new generation of Gaelic footballers pushing for the introduction of semi-professionalism at county level. As it stands, the GAA runs a strictly amateur competition.

"If the GAA is going to veer towards semi-professionalism, then I would have more to think about," he said.

Can any of the Irish lads shed some light on these players? Will any be tempted to go? How much do they get paid now?
A

Cavanagh is the best midfield player in the country, scores a lot of goals for a centre field player, is physically strong, supremely athletic and should have no problem making the switch, don't know enough about Colgan and Clarke to comment. Whether Cavanagh would go is another thing, at 22 he's won all he can win so there's nothing keeping him here in that regard so maybe he'll take up the contract.

As for payment, officially GAA players just get some expenses, unofficially methinks there's plenty of brown envelopes floating around the backrooms of gaa club houses.
C

Cavanagh has turned down the contract from the Lions:


Tyrone fans are celebrating today with the news that star man Sean Cavanagh has decided to forsake a career playing Aussie Rules football.

The Moy clubman has decided not to take up the offer by the Brisbane Lions of a two year contract.
The matter came to a head last Sunday when two representatives from the Lions attended a club game with the contract in their hand ready for Cavanagh to sign.

"They came out of the blue. I had sort of been avoiding their calls since the summer because it had affected my game around the Ulster final time.

"But when they turned up with the contract, the pressure was on," Cavanagh reveals.

However the ace midfielder turned to mentor Mickey Harte for advice and eventually decided the foreign game wasnâ€™t for him.

"I have never been away from home for more than a week or two and we have very close connections.

"And secondly it would be difficult to play on a team as big as Tyrone.

"We have a great chance to build on our success now and there are huge opportunities and spin-offs from being involved with the teams.

"I didnâ€™t want to go to Australia, fail and return home because I would essentially have thrown my GAA career down the tubes.

"I knew I would lose my Gaelic football skills if I went there for two years.

"I was confident I could make it in the AFL but well aware that my GAA skills would wane at the same time."

First test gets underway tomorow in Perth. Ireland go into the series on the back of a resounding victory in last years series in Dublin. Australia will certainly be looking to regain some pride after the performance last time out.

Kevin Sheedy, yeah that one made me look twice as well, the Australian coach faces a hige task to pick up the team after last year but has picked an inexperienced team for the series.

Don't know what to make of the Irish squad, doesn't look as strong as last years and if Munnelly and McMenamin miss out that'll certainly be a big blow. There's too many good players at home for my liking but sure if we win then what does it matter.
A

I just can't help feeling that we're too lightweight for this series, I can see the idea of trying to run around the Aussies rather than competing with them physically but it could backfire big time.
S

Absolutely dominating performance by the Australians. They beat the Irish physically but also at their own game. They were all over them, chasing down tackles and turning the ball over in Ireland's own half. That third quarter was amazing, Australia kicked something likes 8 overs in a row. It ultimately lead to the biggest score in International Rules history.

Embarassing performance from the Irish, hate to say I told you so but I had a feeling it could turn out like it did. McGrath was too arrogant in his approach thinking that last years success would carry on this year, he didn't do enough scouting on the Australians and ultimately they caught us cold big time.

At this level any Irish player who kicks a wide should never be allowed set foot on the pitch again, I can understand it to a certain degree from the Aussies but it's inexcusable to see players like Michael Meehan hitting wides.

We seriously lacked physicality in our approach, and yet for all the supposedly mobile players we took with us the Australians just outclassed us all over the park in every facet.

The Australian ref was a joke but that's just gonna sound like sour grapes on my part despite the obvious truth to the statement.

Fair play to the Aussies for showing up the Irish today, thoroughly deserved win and the scoring tally they put up was far superiour to most gaelic football teams, so class job.
A

Bit late now but Pete McGrath has brought Dessie Dolan back into the squad for the second test, along with Phillip Jordan, Ryan MacMenamin (thug) and Ross Munnelly. Dolan was one of our best players last year and sat out the first test while that f*** wit from Tyrone started and looked like a complete arse.

Damage is done. All we can hope for is a win in the test, although that seems a bit far fetched based on last week.
D

Thanks Ireland for making even Hawthorn look good.
E

yeah Ireland may have lost but the fights that I saw in the news looked pretty full on. Imagine seeing something like that in league or union. talk about bring back the biff and then some in that second test.
S 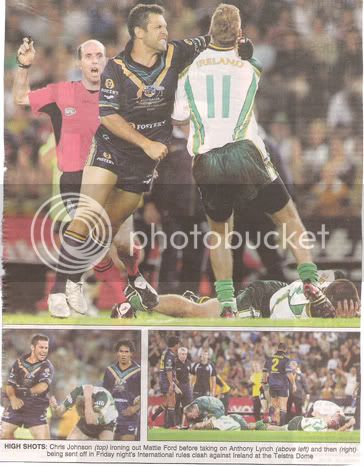 Yeah there's a huge shitfight kicking up over this. Ireland need to get tougher next year. Kennelly's gonna get in there and sort things out. He was livid in the studio during the second test. The likes of Ciaran Whelan, Stephen McDonnell and Paul McGrane were sorely missed.