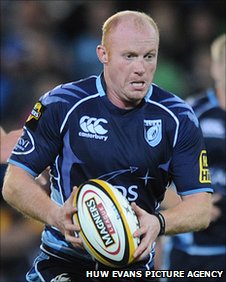 Flanker Martyn Williams is considering a new contract offer from the Cardiff Blues and offers from other clubs, BBC Sport Wales understands.

It is understood one of the teams the 98-cap Wales international is in talks with is Premiership side London Wasps.

Such a move would see Williams, 35, join ex-Blues back rower Andy Powell and Wales defence coach Shaun Edwards, who is head coach at Adams Park.

Williams' contract at the Blues runs out at the end of the season.

It had been expected he would leave the Cardiff City Stadium as the Blues look to cut their playing budget.

But Scrum V revealed in February the region's board were working on their budget which would include keeping hold of Williams.

"Sometimes you've got to reward them for a bit of loyalty - he's been there a long time," said Davies.

"Whether he stays or goes, he's going to get a club. He's been world-class so he's not going to have a problem wherever he goes, or if he stays."

Blues director of rugby Dai Young earlier hinted that British and Irish Lions flanker Williams could still have a future with the region insisting he "wouldn't write off" that Williams would not be here next season.

The Blues will though be keeping hold of flanker Sam Warburton and Wales wing Tom James who have signed new contracts, while Wales star Tom Shanklin's contract is also up at the end of the season.

Should Williams leave the Blues, he would become the latest high-profile star of the current crop to go and play his rugby outside Wales.

Scrum half Dwayne Peel was first to do so in 2008, joining Sale Sharks from the Scarlets, while fly-half Nicky Robinson quit the Blues a year later for Gloucester.

Powell joined Wasps at the start of this season after being released by the Blues and is set to sign a new deal at Adams Park.

Ospreys centre Gavin Henson quit this season for Saracens and has since moved to France to join giants Toulon.

He will be joined in France next season by former Ospreys team-mates James Hook, who has signed a deal with Perpignan, and Lee Byrne who is joining Clermont Auvergne.

And prop Craig Mitchell has agreed to leave the Ospreys for Premiership side Exeter Chiefs.
Click to expand...

Blow for Ospreys, Mitchell leaving, but if he wants first XV rugby each week/to get out of Adams shadow then a move was necessary

Will be interesting to see what happens with Martyn,
Would be good for Blues if he could stay, but if I were him I think I'd move elsewhere (whether that's Wasps or another Magners/Aviva side) - test waters new etc. after 12years at Cardiff RFC/Blues

You also failed to add in Pontypridd RFC
T

Wasps to replace Betsen is the whisper.

Bullitt said:
Wasps to replace Betsen is the whisper.
Click to expand...


Common knowledge, the Fail reported it as soon as the Blues said it they were not going to renew it in the first place.