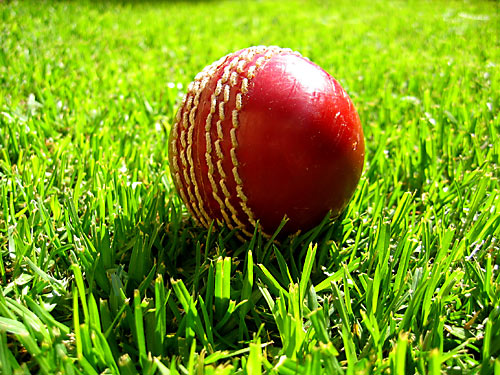 Post all Cricket discussion in this thread.​
Last edited: Apr 16, 2010

IPL semis moved from Bangalore to Mumbai after blasts 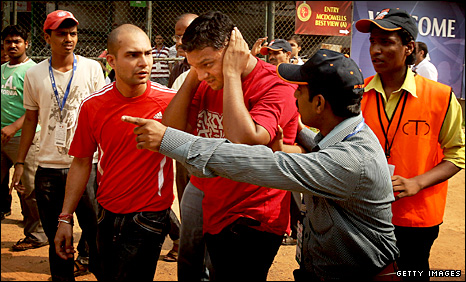 The Indian Premier League semi-finals have been moved from Bangalore to Mumbai amid security fears.

The match went ahead, with Kevin Pietersen playing for Bangalore, but a third device was defused on Sunday.
Click to expand...

And Finally England Make History Congratulations to the new world champs. England certainly spanked us! Well done England played great cricket in the tournament. Unfortunately we needed our openers to spark but the English bowlers never gave us a chance.
F

Kevin Pietersen to be dropped.

Thats my belief after he failed again in the 1st innings of the Test Match against Pakistan. He just doesn't look the player he used to be, the devastating bastmen that put fear in the eyes of any bbowling attack. He looks so out of form it's not even funny. I firmly believe that is due to his lack of playing for his county, a problem that is rife within the English set-up. Peietersen, who has recently announced he was leaving Hampshire (I wouldn't be surprised to learn if some Hampshire members forgot he was a Hampshire player anyway) after playing only 1 T20 game this year.

Yes he has been injured but that was a long time ago now and he has had ample oppurtunity to get some 1st Class Cricket under his belt but for whatever reason he hasn't chosen to do so. I think that he belives his place is secure becuase of who he is which, frankly, is a poor attitude to take. There are players who can play who are scoring lots of runs, Bopara at Essex, James Hildreth at Somerset, Ian Bell would have been in that mix but is injured. Fact is the Ashes are coming up and regardless of Austrailas bowling attack not being as potent as it used to be taking a bastman so out of form could be harmful to the team, play a number 4 that will score runs as, at the moment, Pietersen seems to have forgotten how to.

Pietersen has been out of shape for a long time, even when heading to SA earlier this year.
It's not really a problem for England to leave him out of the squad as they have a great batting line up with Kieskwetter, Strauss, Cook, Morgain and Colly.

Prior saved England's bacon today, superb innings that. Pietersen looked ok until he got out.

Cymro said:
Prior saved England's bacon today, superb innings that. Pietersen looked ok until he got out.
Click to expand...


Prior looked as good as I have seen him bat, was agressive when he needed to be and solid in defence. The perfect keeper-batsman innings. KP did show signs of form but I still maintain he should sit out the remaining tests and play for Hampshire.

bristol-iain said:
Prior looked as good as I have seen him bat, was agressive when he needed to be and solid in defence. The perfect keeper-batsman innings. KP did show signs of form but I still maintain he should sit out the remaining tests and play for Hampshire.
Click to expand...


I don't think he will play for Hampshire again this season with that falling out.

Cymro said:
I don't think he will play for Hampshire again this season with that falling out.
Click to expand...


No probably not and, honesltey, if I was Hampshire coach I wouldn't want a player who refuses to play a 2nd XI game because he feels it's beneath him. I'd want players who want to play.

As for his England spot here are some contenders for that spot;

James Hildreth - Scored 142 for Somerset in the recent win against Notts. James is class, a very technically gifted batsman who plays all the shots. Been Somersets most consistent batsman this season.

Ravi Bopara - Has scored buckets of runs this season but mostly in 40 and 20 over cricket and at Test level hasn't done much against top sides. 3 tons against a weak West Indies team isn't enough.

Adam Lyth - One for the future definatley. Ozzes class and was (I think) the first man to pass the 1000 run mark for the season. Will be an England player by the time the 2013 Ashes comes along.

Michael Carberry - More of an opener like Lyth and didn't really shine when he got his Test chance during the winter but from seeing him a lot down at the Rose Bowl I can tell Carberry isn't finished with England yet.

I would not count out James Taylor at Leicestershire, Stephen Moore at Lancashire and Rob Key at Kent.

Cymro said:
I would not count out James Taylor at Leicestershire, Stephen Moore at Lancashire and Rob Key at Kent.
Click to expand...


Taylor yes, like Lyth will be close to if not key to England in 2013 and beyond. I havn't seen much of Moore so can't really say but I note he was born in Jo'burg so he will be a shoe-in :lol:. I've not been a fan of Key so personally I'd rather not but he is a top class batsman and a good captain but age will probably go against Englands recent look towards youth.

And actually I'll add James Vince at Hampshire too, was noticed by Duncan Fletcher and reminds me of Michael Vaughan. Not as advanced in his develpoment as Taylor but will definatley get a few Test caps.
Last edited: Jul 31, 2010

Rob Key is one of the most underrated batsman in English cricket. When he retires he will be known as the batsman that should have gotten more caps for England especially as he scored a double hundred for England.

I also like Mark Ramprakash as a batsman, did some amazing batting for Surrey around 2004-2006

bates said:
I also like Mark Ramprakash as a batsman, did some amazing batting for Surrey around 2004-2006
Click to expand...


I don't understand why people keep plumping for Ramps, if we ignore the fact that he is too old now, he was never able to transform his county form into International runs. For a player of his calibre he should have made double at least the runs he made for England. It's like Graeme Hick, masterful batsman for Worcestershire but was found out by the very best bowlers. Both were given multiple chances and both were never able to make the runs their talent suggested they would be able to.

Hick would have made a good batsman had he not have had that farce of a deceleration when he was on like 90 odd.

Cymro said:
Hick would have made a good batsman had he not have had that farce of a deceleration when he was on like 90 odd.
Click to expand...


How he didn't ram his bat up Athers jacksie I will never know. If it were me I'd have been practising my pull shot with him 4 inches away

That for me was Hick's defining moment for England, had he scored a 100 in that game then his career for England might have been different.

Hildreth scored another big ton for us today at Canturbury, 151 follwing the 142 he made against Notts.

In other news Flintoff has been told he cannot play any part in the English Cricket season for Lancashire.

Shane Warne to retire from cricket after IPL season