Well the Match of Group A, which is set to be played on Friday evening..

England have announced their squad, but several changes are likely to occur from it due to injuries...

With Olly Barkley likely to be ruled out of the squad due to a hip injury, it leaves England with a Fly Half Dilemna, also we are likely to Vickery being cited and banned for this match. Mathew Tait and Dan Hipkiss also been in isolation after they have been suffering from illness this week it has left a place on the bench as currently there is no fit back 3 replacement. This puts England in a very difficult situation leading up to this game. England could call on the likes of Charlie Hodgson or Toby Flood as replacements for the injured Wilkinson or Barkley, but it would mean a player from the squad would have to be cut.

With South Africa yet to announce their squad, the only loss for them at the moment is the doubt over Schalk Burger who could be cited for a dangerous tackle in the Samoan game.
B

The Springbok squad for Friday is as follows (existing caps in brackets) and RWC Tests in italics.: (Confirmation of starting line-up and bench to be made later).

Vickery banned for 2 games - Stevens in.
B

Serves him right, should get a harsher punishment in my opinion.

Note: Non England fans might think it harsh of me to condemn the captain of my national team in such a way but what he did was really really stupid.
B

Best thing that could have happened to England's chances. He's only in the squad as a name and certainly doesn't have any captaincy ability at this level - After that USA performance, Jonno would have been up in arms at his team while fat Phil only sat down in the locker room and kept his gob shut. Add to the fact that since his big injury a couple of years ago he's not even that good, I can't see much problem with losing him.

Besides, it finally gives Stevens a starting shirt, which so many of us have been crying out for a long time.
A

If only England had brought a Full back and fly half specialist...

I disagree a deliberate trip has no place in rugby whatsoever and should be a red card (as should spear tackles).
S

Thank God Stevens is there, who would surely hve performed better than both Vickery and Sheridan. Whats worrying is we now have a prop that is more mobile than most our back-row.

Anyway if England are to win I believe they will have to do a couple of things:
1) Counter attack well. With Noon and Catty we aren't going to score trys in open play really. Thus our wingers and fullback are going to need to live off scraps and poach some points, much like Argentina against France. I think this is why Robinson is at fullback.
2) Keep the ball close to the forwards. Yes our forwards are worse than their forwards but our backs are a country mile worse. Plus our forwards are big enough to hopefully stick it up their jumper successfuly. Our defenders will have a part to play. Some kind of rush defence must happen stopping the ball travelling past 13, ideally 12. As a final meaure I'd go out on a limb and tell Lewsey to man-mark Habana and stay up in his face. Then get one of the back rows to cover Habana's vacated space.

This game isn't beyond England but another pessimistic squad choice won't have helped. Oh well.
D

england is going to get stomped

england is going to get stomped


England, as they have proved on many occasions over the last few years, do well against SA. We have only lost at Twickenham (NH) against them once in some few years, and still managed to beat them with a 2nd string side before that match. (Lewsey's tackle on De Villiers :bravo: )

England have good forwards, we have proved this in 2007, we front up well in most occasions.
It is a shame Wilkinson isn't playing, SA struggle against him, but with a good game plan, we can beat them.
Habana must be either marked out of the game, or restricted to kicks, or just defending.
We MUST play in their half. No trying to run it constantly down the pitch. We have Kay and Shaw, both fantastic line out men, both WC champions. So why not use them, get the ball in their corners, put them under massive pressure, and if we do this enough, you can get a bit of luck, a knock on, a drop or a charge down. 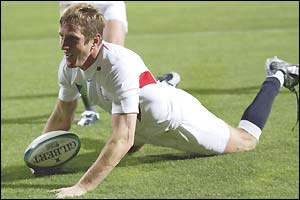 Montgomerie had a nightmare against Samoa, not saying he will have one every week, but why not challenge him with a few high balls, see if he will snap again.

England are up against it, but they can win.
H

Can't see anything else happeneing here than a SA win. How well England play will decide by how much they loose.

NZ are the only ones I can see beating this SA side and vice versa.
S

There's talk of either Catt or Farrell lining up at 10. The reason? In his wisdom, Brian Ashton saw fit to bring only two players who could actually play fly-half. Senile old coot.
R

There's talk of either Catt or Farrell lining up at 10. The reason? In his wisdom, Brian Ashton saw fit to bring only two players who could actually play fly-half. Senile old coot. [/b]
Click to expand...

Come on Webby, it's not like it's a key position or anything....and anyway look at the recent fitness records of England fly-halfs, who could have predicted an injury to any of those players.
C

How could anyone possibly think england can win I don't really know.

SA is gonna imposed the gameplan and they are superior in everything, maybe in lineouts it is pretty even. I think SA with some 15-20.
S

Lewsey to man-mark Habana and stay up in his face. Then get one of the back rows to cover Habana's vacated space.
[/b]
Click to expand...

I think a game plan like that will never work. "You can't stop brilliance", someone famous once said. Getting a player to man mark so intensely is not gonna work in international rugby, look how they tried (and failed) to stop Jonah Lomu back in the day. Habana scores more tries from broken play so allocating 2 players to him is gonna be a nightmare.

Suggesting the Poms should compete with their forwards will result in the same thing that happened to Manu Samoa, the Boks have the best forwards in this pool hands down, taking them on up front will be EXACTLY want they want. Conforming teams to play to their style. If they struggled physically against the USA then I can't see any thought going in your statement.

The only way England had a chance was with their kicking game IMO, and that went out with Wilkinson.
Q

Was the citing officer for that match a kiwi by any chance?
D

I honestly cant see England winning, i would be surprised if they did. I expect England to get a good beating by SA. Especially if Englands game plan is heavily influenced by a forwards game (which is SA style).
E

Oct 16, 2007
Sirius
S
R
what was your highlight of England vs South Africa last night?
2