Originally posted by sky sports
Wales and Cardiff Blues second row forward Craig Quinnell has announced his retirement from all forms of rugby due to a serious neck injury.

Quinnell was forced into the move after seeing a specialist this week, following an injury to discs in his neck he suffered against Glasgow two weeks ago.

"Obviously I'm really disappointed I'm never going to play again whether professionally or even a fun game," the 30-year-old Quinnell said. "The consultant has told me I could be one hit away from a wheelchair.

"That really hits home how lucky I have been, to hopefully be able to continue to play other sports, such as golf and squash, as well as lead a normal life.

"I'd like to thank everybody who has been involved with me in my career ranging from Mike Bieri the kit man, to people like Graham Henry (former Wales coach) and Dai Young (current Cardiff boss), to the numerous players I've played with and the coaches I've played under.

"I'd like also to thank all the Blues faithful who have cheered me on as well as thanking all the opposition fans who have booed and heckled and driven me forward over the years."

The son of Wales great Derek and brother of fellow Wales international Scott Quinnell, Craig was capped 32 times for his country. He started his career with Llanelli and also played for English clubs Richmond, Saracens and Worcester, as well as two stints for Cardiff.
Click to expand...

Well, there go all the pie sales for the Blues away games.
C

A bit harsh if you ask me.

Should have played for Wales this 6 Nations as Wales lacked a second row with some agrresiveness.

However his age was against him. He was good to watch ages ago but died away really.
G

At long last! Too fat, too slow, too useless.
S

Are any of the Quinnell thugs still playing?

I lose track of how many of their tribe are currently involved with the game.
C

younger brother Gavin is at the Scarletts, I think they are the Welsh version of Phill and Grant Mitchell of Eastenders, however both great servants to Wales and their respective clubs.
A

Gavin really looks like a fatter version of Scott, not even close though as a player.
L

granted he may improve but he'll always be in the shadow of the 2 greats and the fat one.
L

well everyone said the same about scott, that he would always be in the shadow of derek.

gavin has more potential than scott did at that age.
A

Can't say I recall that, Quinell was delivering big performances right from the start of his international career, remember his game against the French at the Arms Park.

There wasn't much from Gavin in the games he got last season and doesn't look to have improved much on those this time round either. He's also 22 by which time Scott had more than his fair share of caps.
C

I think Craig was at his best at International level when Wales beat England in 99. I think that was when he reached his peak.

As for Gavin from what I saw last year and what he is now he has improved and will hopefully continue to do so.
G

Heres a pic of Gavin 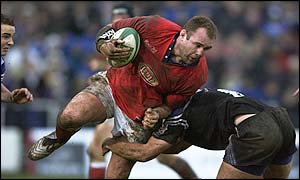 Is that Olly Barkly (sp?) in the second pic? Whoever it is they looks as if they just sh*t themselves.
L

yeah my mistake, but i think he has a great future ahead of him, although using him as an impact player at the moment is the right idea, just like martyn madden
C

martyn madden is great and should be knighted
B

Starting to sound alot like BOM BOM there lora, he your next door neighbour you say?