Frik Du Preez was born in the town of Rustenburg, South Africa and went to school at the Parys High School in Parys (Orange Free State). Du Preez mostly played in the flank or lock positions.

Du Preez played his first test for the Boks on 7 January 1961 at the age of 25 in the flank position against England at Twickenham, London. He played his last test on 7 August 1971 at the age of 35 as lock against Australia at the Sydney Cricket Ground, Sydney.

Frik du Preez was named South Africaâ€™s rugby player of the twentieth century by the countryâ€™s passionate fans of the game. Given that he retired from rugby in 1971, it was a significant expression of the esteem he continues to be held in.

Du Preez had excellent all-round skills, in fact remarkable skills for a big man. Although he was not particularly tall, he was a tower of strength in the lineout. In addition he had a fantastic turn of speed and fine running skills with ball in hand, as he showed in the try he scored against the British Lions in 1968.

Du Preezâ€™s skills extended to kicking â€“ punt, drop or place kick, Frik could do it.

He played in the green and gold for over 10 years, making his debut in January 1961 against England and playing his last match for the â€˜Boks in August 1971 against Australia. In total he played in 87 games for South Africa, and coincidentally scored 87 points. 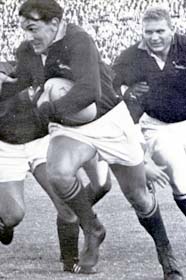 I`ll definately second that nomination- no lesser a player than the great, the truly great Colin 'Pinetree" Meads once described Frik as the best rugby player he ever faced. No small praise there- Meads did, after all, mix it up against the equally great Willie John McBride on the 1971 Lions tour. Ah, the legends of the second row from the 70`s- all worthy of a mention here methinks.
Q

Well done Juggernaut, after my little "it's about time" rant in the Doc Craven nomination I thought I'd put my hand to paper and nominate him myself, you've saved me the effort!

I remember as a little kid going to visit my Oupa, there was a framed picture of Frik, signed by the legend himself, on the wall facing the front door, just as you entered it would be the first thing you see. They used to tell me all kind of tales about Frik and the amazing rugby he played.

Is that it for the nomination discussion? Is Frik in the HOF or what?
G