nothing so exciting there though. some of it looks a bit blurry.

give us some info about the game.
B

Initially, our impressions of Infernal, a third-person shooter from Metropolis Software and Playlogic, weren't very good. The dialogue is painfully cheesy, often with embarrassingly bad voice acting. The gameplay is repetitive with multiple areas requiring annoying backtracking made worse by respawning enemies. Then something surprising happened. As we got further into the game the levels continued to change and stay fresh and the boss fights we encountered actually became a good deal of fun, going a fair way toward keeping the game from falling into complete mediocrity.

The storyline for Infernal may sound a bit familiar. You play as a renegade angel named Ryan Lennox. For some reason or other, a bad man named Lucius Black has recruited you to bat for the other team; you know, the one that smells of sulfur and likes using fire to dish out eternal torment. They hire you to take down Etherlight, Heaven's "secret agency," and recover a powerful new device for Mr. Black that can control all the souls on Earth. To this end, you have been imbued with demonic powers. 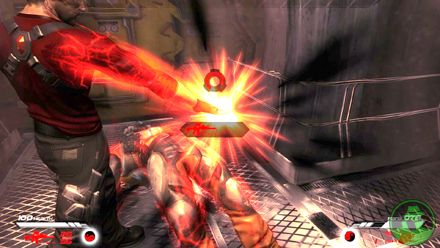 Sucking out souls of the recently deceased restores your life.</div>
These demonic powers go a long way toward making Infernal stand out from other shooters. One of your most basic powers is the ability to charge any weapon you wield with a burst of "hellfire." This is done with your alternate fire button and adds a big punch to your shots. You can use this power to charge everything from your Walther P99 pistol to your AK-47 to a rocket launcher. Certain enemies will have special shielding that requires a hellfire-infused shot to take down.

Your other powers include the ability to temporarily teleport yourself to a nearby location, a special Infernal Vision, a roll move that makes you temporarily invincible, and a tool to teleport objects and other people. Each of these abilities will come into play during the game and you'll have to use them all if you plan on reaching the end. Basic puzzles will have you teleporting through a wall to throw a switch, while more advanced puzzles will have you teleporting objects to bypass barriers. Using your powers eats up mana, which can be recharged by killing people, resting on unholy ground, or picking up mana spheres which are visible only when using Infernal Vision.

The puzzles aren't especially great, but the bosses are. One highlight is when you fight a CH-53 Sea Stallion (a big helicopter) on the deck of an aircraft carrier, complete with burning F/A-18s on the runway. A mini-boss fight has you eluding walking mechs in the hanger of the same aircraft carrier with nothing but explosive barrels, a pistol, and laser trip mines in your inventory and your demonic powers temporarily disabled.

Sadly, combat with regular enemies isn't nearly as fun. The fault doesn't lie with the AI; these guys at least know how to take cover and will juke and dive and roll to avoid their inevitable deaths at your hands. What's annoying is the way bad guys will respawn. Respawning bad buys alone isn't a huge problem in shooter like this, but it's the way that they respawn which irks us. There were countless times when we'd go in a room, kill everyone inside, and then leave only to get shot in the back by a baddie who walked out of the very same room.

Being challenged by the sheer number of enemies isn't so bad, but getting gunned down by enemies who appear out of nowhere isn't any fun. Granted, there are certain enemies who are supposed to be able to teleport, but our beef is with the regular guys who just appear out of empty rooms and hallways and start shooting us in the back. Pair this with levels that require lots of backtracking and you've got a recipe for unhappy gaming. 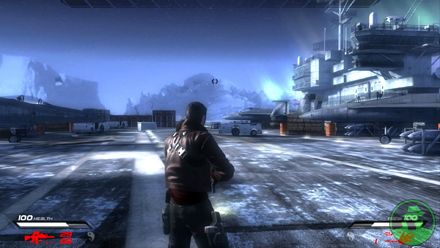 This aircraft carrier level is one of the better levels in the game.</div>
It All Adds Up

The annoying respawn system is bad enough on its own, but there are other small problems that come together to drag down the overall. The self-teleportation system can get tricky when you want to go to a precise location, and setting multiple waypoints only complicates matters. Teleporting objects can be frustrating too because you move them much like the way you'd move objects using the gravity gun in Half-Life 2, only with much clunkier controls. Barrels and boxes will often get stuck in the environment, forcing you to cancel your teleport attempt and start over from the beginning, and some items just refuse to budge at all despite the indicator on your reticule that says you can teleport it. Also, there will be times when Lennox himself will get stuck just by standing near a crate or a box and have to roll to get out of it.

There is a cover system in Infermal but it's practically useless. You'll often take cover against a surface when you don't want to and other times Lennox won't take cover when you do want him to. The rules for what's usable as cover and what isn't seem completely arbitrary. Even when you do take cover its value is limited because when you spin out to fire, you're completely vulnerable, and you spin in and out so slowly that you'll get hit multiple times while you're doing it. We ended up giving up on the cover system all together.

Then there's the matter of the cheesy dialogue and poor voice acting. There's actually a boss who says, "Here comes the bazooka!" Also, the storyline doesn't make sense. Why does your character throw in with the side of Hell so quickly? How does he go from being a righteous angel to someone who goes around sucking up the souls of heaven's agents for health? By the time the game is over, you won't care.

What Infernal has to offer is very simple, pretty graphics, showcased in a variety of levels that take you from a mountainside monastery to an offshore train yard to an aircraft carrier, paired with decent action and surprisingly fun boss battles. Is all this worth the various ****ling problems in the game? Barely. You'll probably fare better if you take this game in small chunks rather than a marathon session; still, if you look hard enough, there's some fun to be had.