So, as I ask myself every mid-September, and as I will now ask you, who is going to win the Super League playoffs?

The bruising and exciting league season has reached its climax, and there are now six teams left with a chance of glory, and an appearance in the grand final at Old Trafford, Manchester, which is being held on the 15th October 2005.

Which teams are left standing tall and proud, ready for a whole new style of rugby league football? Join me as I run down our contenders one by one.

1. St Helens - St Helens finished first this season, and that is of little or no surprise to me. I have said since day one that I believe that St Helens would be either first or second, probably first. There were a number of factors that led me to believe that we would be a lot closer to the ***le than we were in 2004.

First and foremost, we signed Jamie Lyon. When we sold Martin Gleeson to Warrington after his part in the "betting scandals" of 2004, I was furious. Gleeson is a top centre, and he proved that in the Tri Nations last season, when he caused both the Australians and the Kiwis no end of problems. I identified Jamie Lyon as the only man who I would accept as a replacement for Gleeson, and thankfully my board and my then head coach Ian Millward agreed with me. Lyon has so much to offer - creative genius, huge amounts of pace and strong, direct running, coupled with a near perfect defensive game. I predicted big things from Lyon, and has he delivered! I will be very surprised if he does not win Super League's Man of Steel, our award for the best player of the season.

Secondly, our pretty lightweight pack was boosted by the signing of Paul Anderson from Bradford, and he is one hell of a big player. 19 stone, in fact, and when he's carrying the ball up he is very hard to stop, as you can imagine. Alright, he is sometimes a liability in defence but he is superb at wearing teams down. I knew he would be a huge impact player.


Thirdly, with the capture of Lyon, I was confident that the service to Darren Albert on the wing would be improved. Albert has developed into the top player I always thought he would be, he is a try machine. He used to be paired up with Martin Gleeson but Gleeson's only fault was that he was a touch greedy. Lyon would free up the play and ensure that Albert got enough good ball to do the damage with his pace down the wings.

Fourthly, I banked on Keiron Cunningham having an injury free season. In the league, so far, he has, and he has been absolutely superb for us. On form and fully fit I believe, and Daniel Anderson believes, that he is the best hooker on the planet, very very definitely the best in the Super League. He has made so many yards for us this season it's unreal. If he can keep fit he can keep our charge to the trophy well on course.

All this has come off, and that's why we finished top of the league pretty comfortably in the end. Lyon has been sensational. He chipped in with 20 tries himself, and laid on so, so many of Albert's 25 tries this season. Bolstered by Anderson (Paul) the pack has had a lot more bite and impact this season and teams have struggled to contain us - this amount of puncturing has given Cunningham, James Roby and Mick Higham an absolute field day as their pace from dummy half gets them well over the advantage line.

We have only lost one league game since Daniel Anderson was appointed manager, and that was on Saturday to Bradford with first place already wrapped up. This time a fortnight ago I would have said that Saints would be Grand Final winners with consummate ease. But in beating Wigan we lost Darren Albert and Sean Long for the rest of the season. Albert fractured his cheekbone in an accidental clash of heads with Brett Dallas, but Sean Long was taken out for a cold, calculated, vile assault by Terry Newton, who deliberately elbowed Long late in the face well after the ball had gone, also fracturing his cheekbone.

Injuries, nothing else, are the reason why I think St Helens' season is finished. I think that we've had it. We might make it to the Grand Final, but we have no creativity and don't look like scoring full lengther tries anymore. Vinnie Anderson has just come back from injury, but I fear that glory for Saints is a bit too big of a step away for now.


2. Leeds Rhinos - Ah, the Leeds Rhinos. Last seasonâ€™s deserved champions, and 2005's UNdeserved World Champions. Leeds are a good team, and they only lost out to us late on in the season, they have hit a real poor run of form. It was always going to be between Saints and Leeds for the top spot, and Saints have managed to overhaul the champions. But despite a great deal of wobbling, Leeds' challenge must not, cannot and will not be discredited. This is a losing team that has learnt how to win. They have points to prove after losing the Challenge Cup Final to Hull FC in August, when they DID lose their bottle.

One of the reasons the Rhinos have struggled so badly this season is that Danny McGuire hasn't found his form. After bursting onto the scene last year with 36 tries the dinky little Yorkshire man with the bionic sidestep has had an injury hit season, and it could be that a lot of people have worked out his game. People are rushing up to him a lot more than normal these days.

There's also some sort of exodus at Headingley for some reason. People like Marcus Bai, Chris McKenna and Mark Calderwood are leaving and as of yet, there arenâ€™t many fundamental changes being made. 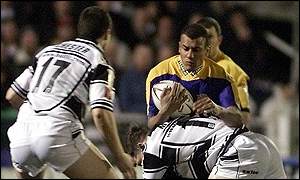 The 25-24 loss to Hull FC in the Challenge Cup Final has really knocked the stuffing out of them, and has caused potentially irreparable damage to their season. However, somewhat crucially, they won their last league game of the season, beating Wakefield Wildcats 34-26 to take them into a clash with St Helens in the playoff semi final, the winner going to the Grand Final.

3. Bradford Bulls â€“ Bradford have had a terrible season. A late run has dragged them back into contention, but they have had an appalling time of things. At one point, them not being in the playoffs was unthinkable, along with Wigan (the only mention they will get in the Playoffs thread!)

To be fair to the Bulls, they have had their fair share of injury problems. They were without many of their first choice players for the first half of the season, and this was reflected as they stuttered into 5th place. However, when the big guns like Lesley Vainikolo and Shontayne Hape returned, so did Bradfordâ€™s form. They have been locked in a battle with Andrew Johns and Warrington for the third spot, a battle which Bradford only managed to win on the last day of the season with a 32-18 win at a depleted, uninterested St Helens. That match was arguably the clash between the two form teams in Super League, although much of the competitive edge was taken off by the fact that Saints had already secured top spot with a win at Wigan. (OK, I canâ€™t help but mention them, itâ€™s just too funny!)

The Bulls are on form. If they are to get to Old Trafford they will have to do it the hard way, but I would not back against them at all, they are playing very well.

4. Warrington â€“ Ah! Thatâ€™s got your attention, hasnâ€™t it? The very mention of the word â€œWarringtonâ€ creates a frenzy of excitement down under these days, and rightly so, as this is where Aussie talisman Andrew Johns is currently plying his trade.

After 4 games, Warrington were bottom. Hardly surprising, I thought, they had signed Logan Swann, who I believe to be the most overrated rugby league player on the planet. They signed a lot of players over winter and when thereâ€™s an extensive rebuilding programme going on at any time, it was always going to be a problem of getting the players to gel and onto the same wavelength.

They then went on a good run which was only ended at the end of August when they lost to Leeds and Saints amongst others.

People believe that everything has changed since the short term signing of Andrew Johns. I am here to tell you that this is the WRONG answer. Warrington are not going to win the Super League, I am sure of it. I will willingly eat my words if I am wrong, but I am sure of it. Johns is an awesome player, but no player is bigger and better than any team. People say he was unbelievable on his debut. I thought he played well, I have seen Andrew Johns play far better though. The next week he was positively poor.

â€œBut the confidence he has instilled in his team mates is importantâ€ as NZL Fan has pointed out. I quite agree, but Warrington have been playing like a team who believe in themselves this season because they are a good team and they know it.

They are heading for a fall and I believe the Johns factor will get them close, but not close enough.


5. Hull FC â€“ The perennial underachievers, Hull FC have finally seen a result to their big spending and luring of big name players. They will be absolutely delighted with winning the Challenge Cup, and rightly so. It was a superb win for them, there was something all along making you think that it was their destiny.

If Hull werenâ€™t so inconsistent they could have had 3rd place wrapped up a long time ago. As it turns out, they lost to Warrington on the last day which saw them slip to fifth place â€“ had they won they would have been third and guaranteed at least 4th.

You never know which Hull you are going to get, and although you are always guaranteed a tough, physical match, I think that Hull have happily won their trophy for this season and that they will bow gracefully out of the playoffs early on. 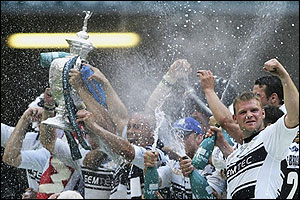 6. London â€“ London secured their position in the playoffs on the last day of the season with a 68-10 win over pathetic relegated Widnes. London wonâ€™t make much of an impact on the playoffs, but fair play to them, they have not just turned up to make up the numbers. Luke Dorn has had a very impressive season, as has full back Lucky-Luisi. There are tries everywhere you look for London, but they are prone to quick play of the balls and I think they also will bow out of the playoffs early on.

Week 3: Leeds to lose to Bradford

I said earlier that I donâ€™t think Saints will win, so yes, Iâ€™m tipping Bradford Bulls to win the playoffs. Would love to be wrong but I think Saints are well out of it, sadly.