London Olympics may ban vuvuzelas and curb mobile use 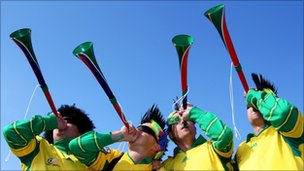 London's Olympics may be denied the sound of the vuvuzela's buzzing undertone as Games organisers plan to ban or restrict items entering venues.

Conditions on tickets, which went on sale this week, aim to curb the use or entry of items like horns, drums and mobiles as they may disturb athletes.

The list, a part of safety measures, includes umbrellas and picnic hampers.

Games organisers say "final terms and conditions will be made clear to ticketholders" when tickets are issued.

The plastic horns became a fixture of the 2010 Football World Cup in South Africa and vuvuzelas were sold at venues and blown at all of the matches and events.

The horn, made famous by football fans, found its way into the Oxford Dictionary of English, but is not allowed in several football stadiums and music events in the UK.

Musical instruments, liquids in excess of 100ml, camera tripods, flags of non-participating countries also figure in the list. The use of mobile phones in certain events could also be restricted.

The organisers also plan to ban "objects bearing trademarks or other kinds of promotional signs or messages (such as hats, T-shirts, bags, etc) which Locog (the London 2012 organisers) believes are for promotional purposes", the terms say.

A Locog spokesman said: "In many cases, decisions have not been made on what will or will not be allowed into venues.

"When tickets are issued the final terms and conditions will be made clear to ticketholders."
Click to expand...

Good idea. I'm fairly sure the vuvuzelas have already been banned for the RWC.

They spoiled the atmosphere of the World Cup matches last year I think. It was a shame that every game sounded the same...

The only reason the vuvuzelas are used here in SA is because unfortunately the level of football is **** poor, and the fans need something to occupy themselves

Prior to the world cup I thought I'd never experience such a turgid match experience as I had for a Arrows game vs. Maritzburg, but bloody hell Portugal vs. Brazil was bad

Good,
How you supposed to hear the starters gun etc. if there are thousands of people blowing Vuvuzelas

Merchandising could be interesting if they decide to ban stuff. That could mean only addidas gear could be worn in the Olympic stadiums :lol:

I have the Vuvuzela app on my Iphone so I'll just use that.

lynam1104 said:
I have the Vuvuzela app on my Iphone so I'll just use that.
Click to expand...

If they let you in with your iPhone!!

And hide what type of tape it is too