Otter news is the only reason I got twitter. Used to be better though - the original.

As owner of 2 border collies can add they are full of energy.
Even old 14yr still runs for his ball.

duncanb said:
As owner of 2 border collies can add they are full of energy.
Even old 14yr still runs for his ball.
Click to expand...

And they're very smart too. https://www.aspcapetinsurance.com/r...e brainiacs,energy, loyalty, and friendliness.

Al Bangor said:
And they're very smart too. https://www.aspcapetinsurance.com/resources/border-collie/#:~:text=Border Collies are the brainiacs,energy, loyalty, and friendliness.
Click to expand...

Certainly are, my previous collie who lost in April,favourite play was to find a stone that we would place on our large gravel drive.
Only bring the stone with sent of person who placed it.
His sire and grandsire were both mountain rescue search dogs.
Nearest thing we could train him to do along with agility.

Love Borders. I am honoured when two I come across in the park on my walk choose me to play throw the stick with. Although One bought me a plastic bottle to throw and retrieve the other day, then the other day bought me a mini log. I couldn’t refuse her offer. Beautiful dogs.

Had to put that through Google translate because my GCSE French is very scratchy now.

more or less....
"I couldn't stay at home with my mrs and getting pissed off"

Why does Kate Bush turn up the heating?

Because she’s running up that bill.

If a christmas trees falls over in the living room, but there's nobody at home to hear it... was the cat attacking the tinsel again?

Airline to allow giraffes on board as 'emotional support animals'

In a move welcomed by nervous fliers, the tiny Kenyan airline Icarus Air has announced that from March 1st​ it will allow passengers to be accompanied by a giraffe as an 'emotional support animal'.
FAA regulation 4A-29147 (Appendix G) currently restricts such animals to domestic pets including cats, dogs, small birds (excluding pigeons) and 'other such creature as shall be deemed to be of essential psychological reassurance to a passenger during his/her/its flight'.
It is this last phrase which Icarus Air successfully cited in a recent Supreme Court appeal, leading to the market-leading announcement. We understand that passengers will be permitted one giraffe each, up to a maximum height of 4 metres. Giraffes will have no duty-free allowance but will each be allowed a 22 kg carry-on basket of Arcacia leaves.
The airline's CEO David Lankenua was highly enthusiastic about the new service.
"This is a very exciting day for our company," he told Spoofflé. "It means that Icarus customers, even very scared ones, can now fly without a care, anywhere in the world."
We asked Mr Lankenua for flight costs for a typical return trip from Nairobi to New York on one of the company's three Boeing 707 aircraft.
"Well," he said. "Let's not get ahead of ourselves. A single flight to New York with a 3 metre giraffe would cost only $29."
Mr Lankenua was reluctant to give a price for a return flight, adding only "let's see how the flight to New York goes. If it gets there, we'll try to come back as well." 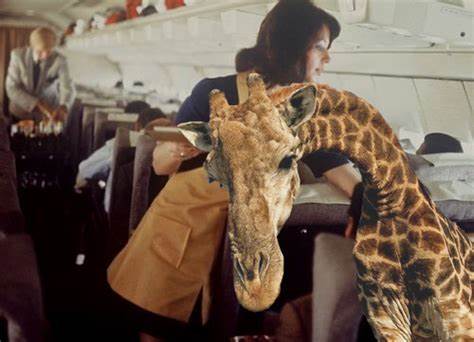 I need Stephen Fry to read this:

M
Players that make me laugh

lads...lets troll a chat service for the laugh...