British and Irish Lions: Prospective 'fourth Test' will not happen 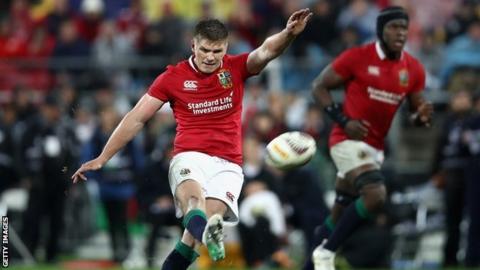 
None of the British and Irish Lions' England players will be released to play for the Barbarians in November, ending the prospect of an unofficial 'fourth Test' against the All Blacks.

The Barbarians face New Zealand at Twickenham on 4 November.

It was suggested the Barbarians could select a team similar to the Lions side that drew the series in New Zealand.

But the likes of Maro Itoje, Owen Farrell and Mako Vunipola will not be released from the England camp.

"England's players will be focusing on preparing for England's matches ahead of the Old Mutual Wealth Series," an RFU spokesperson told the BBC.

There were 10 Englishmen in the Lions' 23-man squad that drew 15-15 with New Zealand at Eden Park in the third Test to draw the series 1-1.

Eddie Jones' side play Argentina, Australia and Samoa in successive weekends in November.

Good, it's a ridiculous idea.
T

The Lions should never play at home.
It's not what they were designed for... and playing at home, with the best players of 4 countries, would be an enormous advantage.
You must log in or register to reply here.
Share:
Reddit Pinterest Tumblr WhatsApp Email Link
Top