Tottenham Hotspur continued their stuttering start to the new campaign as they lost at home to ten-man Everton, whilst Manchester United avoided a shock against Premiership newcomers Watford to maintain their 100 percent record.

Everton made it seven points from three games despite being reduced to ten-men as they condemned Martin Jol's Spurs to a 2-0 defeat at White Hart Lane.

David Moyes employed five across midfield in anticipation of a hard afternoon, but that was soon reduced to four when Kevin Kilbane received his marching orders as he picked up a second yellow card for fouling Lee Young-pyo from behind after 33 minutes.

However the numerical disadvantage did not hinder The Toffees as they look the lead on 53 minutes when Spurs defender Calum Davenport scored an unlucky own goal as he diverted Joleon Lescott's header past Paul Robinson.

The men from Merseyside sealed Spurs' second defeat in three games when Andy Johnson, celebrating his return to the England squad, finished expertly from Phil Neville's cross on 66 minutes.

Sir Alex Ferguson's Red Devils claimed their third victory in three games to stay top of the table with a 2-1 win at Watford, but it was not easy going against Adrian Boothroyd's Hornets.

The opening goal on 12 came from an unlikely source, as Mikael Silvestre claimed his first away strike in The Premiership by drilling a shot back across goal after being played in neatly by Louis Saha.

However the French defender was exposed on 34 minutes as he let Ashley Young wriggle free on the right, and the livewire forward played in a low cross that Damien Francis tapped home for his second goal of the season.

Just when The Hornets looked like scoring a second a loose back-pass from Matthew Spring on 52 minutes allowed Ryan Giggs to steal in, round the keeper, and put his side back in front.

The Valley witnessed an afternoon full of action as both sides were reduced to ten-men when Charlton Athletic beat Bolton Wanderers 2-0 to record their first points of the season.

Iain Dowie's men were up against it after just 28 minutes when Hermann Hreidarsson became the second Addicks player this season to be dismissed in the first half as he was adjudged to have elbowed Kevin Davies in the face as he jumped for a high ball.

The London side were also punished in the second half when Amdy Faye felled El Hadji Diouf in the penalty box, but there appeared to be minimal contact and the Senegalese striker fluffed his lines in any case as Scott Carson prevented him from scoring his second spot kick in a week with a good stop.

However Darren Bent was not to prove as wasteful just after the hour, and after being tripped by Tal Ben Haim the England international sent Jussi Jaaskelainen the wrong way from 12 yards to put his side in front.

Incredibly Davies was then dismissed in an identical fashion to Hreidarsson, as the victim became the perpetrator with quarter of an hour to go as he challenged Faye, and Dowie's men extended their lead as Bent claimed his second by collecting Jimmy Floyd Hasslebaink's flick-on and prodding the ball past Jaaskelainen.

It was a landmark occasion for Latics record signing Emile Heskey as he scored his first goal for the club on his 500th career appearance. The burly striker poked the ball home on 38 minutes after a delightful cushioned through-ball from Lee McCulloch.

Fellow newcomers Sheffield United were also cut down to size when Fulham recorded their first victory of the season with a 1-0 win at Craven Cottage.

Chris Coleman's side edged in front when new signing Jimmy Bullard scored his second goal in three games in spectacular fashion on 40 minutes, curling an inch-perfect free-kick over the wall that left Paddy Kenny motionless in the Blades goal.

Liverpool had to fight back from a goal down in the second Premiership game in succession to beat West Ham 2-1 at Anfield, as the Kop celebrated its centenary in the early kick-off.

Bobby Zamora brought back memories of Paul Konchesky's goal in the FA Cup final between the two teams last season as his miscued cross beat Jose Reina on 12 minutes, but two fantastic goals late in the first half turned the game on its head.

First young Reds defender Daniel Agger was allowed to run at the Hammers defence and from 30 yards unleashed an unstoppable drive that curled away from Roy Carroll and into the top corner.

The second goal was down to finesse rather than raw power, as on 45 minutes Peter Crouch collected a deft reverse pass from Luis Garcia, rounded Carroll and finished expertly through the legs of Anton Ferdinand.

Dirk Kuyt also made a fine impression as he made his debut in the second half, setting up Craig Bellamy for a disallowed effort, but Alan Pardew's side should have drawn level when Lee Bowyer missed a glorious opportunity in front of goal. 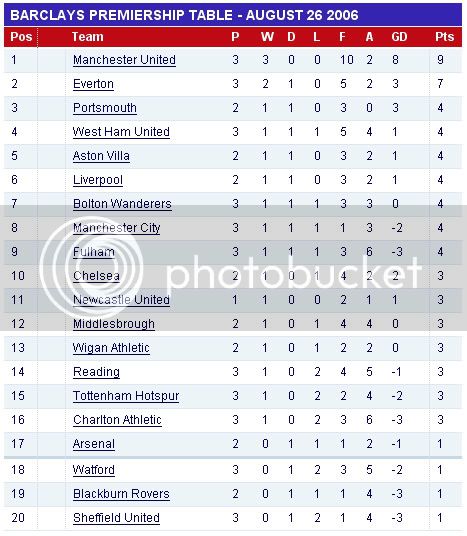 Need to watch the Liverpool Game Highlights to see Agger's Goal...
Hopefully a defeat for Chelsea tomorrow, to help things along...
M

wots the go with arsenal this season?
D

perfect goal, nice on the eyes

ahhh yea wigan big win this past saturday.. im happy about that.