Mine was Donatello.
I was about 4 (maybe) 5 when the series first started here and i was mad about it.
It rocked and i know it was a huge worldwide phenomenon.
So come, hands up who loved the turtles and which one was the best.


Also i'd like to know something:
None of my mates seem to believe me that when we were kids it was called 'Teenage Mutant Hero Turtles'. This may only have been the case in Britain, i'm not sure, but I swear that's what it was called.
Can anyone else back me up on this?
O 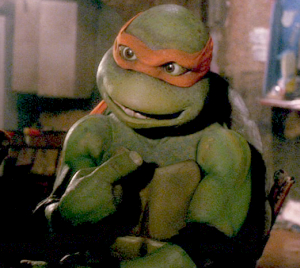 They were freakin' awesome!
Has the TMNT movie come out there yet? I'll probably rent it...it's all CGI. You can't beat the live action versions we had, though...plus a cameo by Vanilla Ice (in II) "Go Ninja Go Ninja Go!"

The Teenage Mutant Ninja Turtles (TMNT), also known in some countries as Teenage Mutant Hero Turtles are a fictional team of four anthropomorphic turtle mutants, who are trained by their sensei, Master Splinter, to become skilled ninja warriors. From their home in the sewers of Manhattan, they battle petty criminals, evil megalomaniacs, and alien invaders, all while remaining isolated from society at large.[/b]
Click to expand...

Definitely Michaelangelo...coz my friends liked him.

Has the TMNT movie come out there yet?[/b]
Click to expand...

It's soon to be coming out down this way.
B

Michaelangelo. It's his fault I've used the word "Dude" for the past 18 years.

Why the hell did i like Donatello tho?
The guy invented things (i'm not itneliigent enough to relate to that) and uses a bo-staff....not as cool as nunchuks.
These days, i relate to Raphael. He's witty...in a way that appeals to children.
W

its been out down here for about 4 weeks i think.

Now this is my kind of thread!

I grew up with the Turtles, was the perfect age to be part of the Turtle generation.

My favourite has always been Donatello. He's hilarious, the fact that he's more intelligent than anyone else means he can show off. He always got the best lines in the original films.

Originally posted by Rugby_Cymru
None of my mates seem to believe me that when we were kids it was called 'Teenage Mutant Hero Turtles'. This may only have been the case in Britain, i'm not sure, but I swear that's what it was called.
Click to expand...

I took my younger brother to see the new film over the Easter break and was a bit dubious about how good it was going to be at first. However, it's actually very enjoyable and the use of CGI is absolutely stunning. One fight scene in the rain contained so much visual depth it was almost unbelievable.

Michaelangelo was just an attention seeker....He's a nice lad but "me, me, me" is all he's about.

Donatello was the man.
M

I agree with RBS...Donatello certainly was THE MAN(or the turtle...)

Where is Casey Jones?

The man was an absolute legend. Casey and Raph plays out like a classic comedy duo.
W

its been out down here for about 4 weeks i think.[/b]
Click to expand...

I dunno, you maybe right. But I thought I just saw a preview trailer of it recently ending with 'Coming Soon'.
R

But doens't anyone like how witty Raphael is?
I can appreciate it now i'm...18 years older. :wacko:


Not seen any of the brand new episodes that they show on tele.
Anyone know if they're any good?
S

Not seen any of the brand new episodes that they show on tele.
Anyone know if they're any good?
[/b]
Click to expand...

I have a younger brother and therefore and excuse for having watched them. They've tried to make the Turtles 'cool' and opposed to funny as they were originally. Doesn't work.
W

its not in at hoyts as its run out quickly. dunno about reading.
B

However, has anyone ever notiecd that absoloutely no-one likes Leonardo?
O

However, has anyone ever notiecd that absoloutely no-one likes Leonardo?
[/b]
Click to expand...

He was too busy being "responsible" to be cool.
G

April cos I would do her
R

I think we all established that we would do April...
G

I think we all established that we would do April... [/b]
Click to expand...

I just wanted to clarify it...
B

I wonder if April had a ginger minge...

What is the image on the t-shirt

Sep 15, 2015
Adammorris12
A
M
Anyone here do power cleans for strength/power? Tutorials/videos showing the lift?