i have a playstion 2, and i think the best tennis game around it is Smash courrt tenns 2....
what good game has now arrived it to the playstation 2?
A

The best tennis game on the PS2 ive played is Virtua Tennis 2.

Which is an inferior port of the Dreamcast version.

Make of that what you will.
A

Virtua Tennis 3 is the newest I think, and it looks amazing, I haven't got it yet but I hope I will do soon.
D

Virtua Tennis 3.
I haven't played Top Spin, though I'd like to.
M

Although its perhaps not the most realistic of Tennis games, Virtua tennis has to be the best out there, just in terms of pure gaming enjoyment. Gimme that over a game that is realistic but crap to play!
T

played every tennis game to date. virtua tennis 3 can be a bit ridiculous with two players that know what they're doing. Lots of diving shots and endless rallies. Depends what you're after in a game.
J

virtua tennis 3 is the best on market today
A

Virtua is Tennis on roids with endless rallies - u cannot even hit it out...i bought this and after 20 matches i managed to hit it out 3 times - bullshit

Top Spin has everything........its sensitive with the direction you pick so u can hit it out if you go to far right or left or long, or in net if short

u cannot do that in virtua, its just hit, hit hit, until u wrong foot someone

Top Spin3 will **** all over the latest virtua, as top spin2 already does.
M

Hopefully the next top spin will incorporate edge vibration like in Rockstar's Table Tennis!
E

top spin 1 for the XBOX, best online community.
I just don't like Virtua tennis it's fun at first but in the long run you see the limitations of the gameplay, to much diving and not enough depth.
L

To me the lobs seemed totally useless in VT3. The power moves in TS ruined that for me. I havent played TS2......so the best tennis game I have played is probably VT2 on the Dreamcast.

Or maybe a game called tennis elbow for the PC......i downloaded the demo bloody years ago, and all's I remember is having a net rally against my mate where we were both face to face at the net hitting the ball at each other at about 1000 times per minute. We laughed our arses of for ages.
A

For me there's not even a contest, even Top Spin 1 is better than Virtua Tennis 3. VT is way too arcade ...
Z

I can now confirm you're all wrong. Even me. Why so? Because the best tennis game is quite obviously SEGA Superstars Tennis!

Alright, technically it's still in development, but it's being developed by Sumo Digital. Considering they handled OutRun 2 (plus it's 2006 counterpart) and Virtua Tennis 3, I believe we are onto a winner.

That, plus playing tennis in a 3D rendered version of Green Hill Zone is quite clearly the way the game of tennis was always meant to be played. 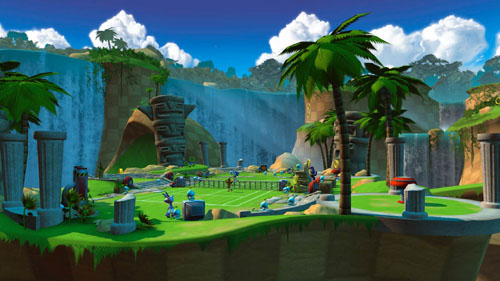 oh hell yes. it will be awesome fun. some bits of info I found

Sega Superstars Tennis has over 15 playable Sega characters including Sonic the Hedgehog, AiAi from Super Monkeyball, Ulala of Space Channel 5 and Amigo from Samba De Amigo. In addition to their own unique attributes, each character will also come equipped with its own superstar tennis skills.

Exhibition mode offers the chance to challenge Sonic, or the character or your choice, to a match on one of many courts, including Sonic's home court of Green Hill Zone, or Amigo's Carnival Park court. Wherever you play there will be a host of Sega celebrities cheering you on from courtside and by partaking in crazy doubles matches with your choice of partner, you could end up playing against some pretty unusual couples. Prove your Sega hero is the shining star of Superstars Tennis by collecting silverware in the Tournament Mode. There will also be the opportunity to unlock a host of extras which will be announced in the near future.
G

Virtua tennis 3 is the best!
And better on next gen! =)

G
The Annoying Thing (the Game)

Your Game of the decade?