If I suggested an Xmas/New Year party some time over the festive period at my house, what would be your reaction?
M

i would say "Come again?" and then i would laugh because i said "come"
W

are you paying for the trip? if not do we have live streaming so it looks like we are there?
G

Not in my house mate - Mrs SHRLFC (and me in particular) wouldn't like that!

Aussies and KIWIZ - I don't expect you to be able to make it!
C

Righto. I make it my mission to come to next years one, if Charlie and Dan come to the Southern Hemisphere one the following year.
S

I will get down there one day, when I don't know, but I will.

Although if any of you visit England you MUST give me a shout.
W

i thought its your shout if we come up
C

As long as you look like Basil Fawlty or the man in your avatar (whoever he is), then I'll be there!
S

i thought its your shout if we come up [/b]
Click to expand...

I just mean in general. Like, if you ever come touring, give me a shout.
D

We could always hold a communist themed party!

The red roubles will never roll in my house, cockle!
R

Hang on, that would mean i'd have to cross the border to the Evil Land.

Folks 'round here say that those who travel 'cross the border face ungodly consequences for the unholy act they act upon themselves and their country.
It's stated in a short poem,

"Folks who travel 'cross the border,
Face ungodly consequences,
For the unholy act they place upon themselves,
And their country."

I daren't say the tales i've upon a whisper, but 'round 'ere in the Holy Welsh Land it's been said that anything east of Cardiff is E*n*g*l*i*s*h...and those be wicked lands!
Many times i've 'eard older folk saying how John Bach and Dai once took it upon themselves to cross the border. Alas, the gentlefolk did not dare cross t'other side during the darkened hours, but took it upon themselves to trek upon twilight. It was said that upon such giddying hours, where everything looks romantic, the evil-that-no-one-should-speak-of hunted down the pure souls and with one deep breath took away their accents. They now roam the streets as white as the ghosts that doth haunt us carrying nothing but their clothes on their back and a red rose in their hands.

The land of the red rose!

Our trustworthy HeadFather claims wicked magic be used willy nilly 'cross that border; that the wicked folk, the evil-that-no-one-should-speak-of treat their lamb not as companions but as mere mastication aides.
T'other sex be cavorting on the streets, preying upon the desperate and lonley flaunting their delicacies for a reasonable price.
People dress differently 'cross the border. Not all folk have to wear dresses and they don't retire every night amongst all the other animals.

Sometimes i have commented openly about whether the wicked place 'cross the border is all that bad.
I usually get flogged 2 dozen times for such thoughts - i have learnt not to think out loud anymore.

Everynight before i sleep i think about the land of the red rose, where people wear things other than dresses and where they treat women like sheep and sheep like carrier bags.

THAT'S IT!
I shall attend your Christmas party you speak of. What ungodly rituals you'll perform there i have no idea but if there's one time of year my HeadFather will forgive me it would be at christmas time where for one day of the year i shall only recieve a dozen floggings, instead of 2 dozen.
I could make the excuse i wanted to buy a flower for my dear wooly companion.

I don't like Christmas, that's a Christian thing, I'm not christian so why should I party for that? Do I party for Anoukha?

New Year's day is a better reason but I have already many commitments that week and anyway I guess that you will organize that in Britain and I am already spending too much time over there for my job I won't spend a penny to cross the Channel.

So No, I won't go the TRF Christmas Party.
R

I'd try my best to make it providing your house isn't decorated thusly :

I have a signed Champions League winner 2005 photo framed on my wall but that's as close as you'll get to the above.
R 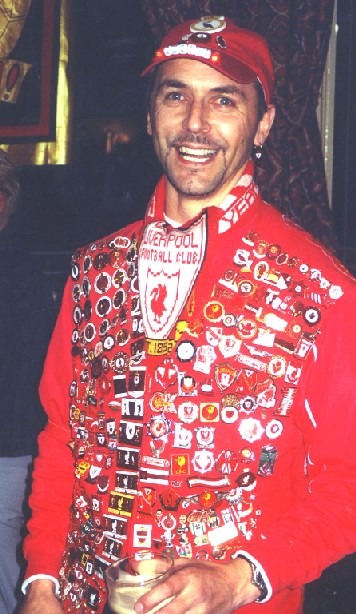 I will unfortunately be invalided by an operation over Xmas so going all the way Oop North isn't really an option.
R

What date are we talking...if a bunch of rugger buggers are coming up here then on the 30th Waterloo are due to get beat by Doncaster (I couldn't go though as Everton are at home).

LSH (the original Liverpool Football Club) are playing Winnington Park on the 16th and have a cup game on the 30th.