Only a few hours to go... Until we spank the theeving scousers arses...

Ahh this will be closer than what is expected...
B

To Liverpool of course...

Bellamy Hat Trick and Alonso Strike from his own half :bleh!: :bleh!:

Liverpool win alright would be my take, United have had 1 test this season and failed it, their champions league form doesn't reflect how poor they were against Celtic and Benfica especially, who are hardly giants of the European game. Their premiership wins have come against mediocre sides.

Not forgetting Barca vs Real Madrid!!!
B


But as we're discussing afternoons... This will be mine; 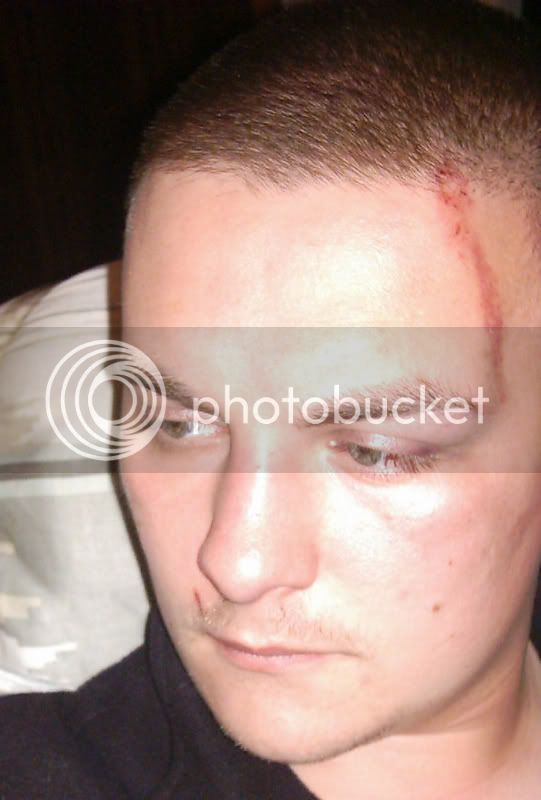 Well that will learn ya for being a mouthy f***ing Manc!!!
B

How is it mouthy to sit quietly and be minding your own business exactly?
G

Well thats what they all say!!! I werent doing nothing officer
B

Say what you want. Bunch of little shits were in the pub and gave me a kicking for no other reason then my shirt.

dunno wat ur complaining about to be honest it is a little scratch, i have had bigger paper cuts... you dont see me moaning about it...

at the end of the day little shits support all sorts of teams even united...

and if they were little shits you should of kicked their heads in...
B

Yeah, a big group of them. It's not just a scratch... My forehead was ******* blood, my lip is cut, you can't see it in that photie but I have a bloodshot eye underneath one of my 2 shiners and my nose may as well be broke it hurts that much. Not to mention that my neck is once again f***ed.

When yyou get put on the deck and a group start putting the boots in, all you can do is cover your head and pretend your at the bottom of a ruck.

Then wait for it to finish.
O

That sucks...why are the kids so angry?
S

Great victory for the Red Devils. :bravo: Great to see Scholes putting one into the back of the net. :bana:
R

Wow, that's awful...where did this happen?

was it any of these liverpool fans? :

Whereas Evertonians are angels, aren't they?
R

Whereas Evertonians are angels, aren't they?
[/b]
Click to expand...

We don't build ourselves up as such.

Your support is no better, no worse than anyone else's. It just grates the way some of you make out you are a cut above.
S

Some being the key word. I would however, advise you that in last week's league table, "The People's Club" had more arrests and more hooligan orders out than your neighbours. Perhaps he who lives in a glas house should not throw stones.

(not that I;m saying you're a hooligan.)