What Teams/Tournaments/License's can we expect?

What information do we already know and can we suppose to be included?

What are the teams, tournaments & license's that we can expect this time round?

So we definately have the:

... as licensed tournaments (and related teams), now what about other teams?

... they're all the teams that I've seen from the 2 video's and some still images so far that have the proper emblems, sponsors etc.

What about other tournaments ...?

Is the 6 Nations included as a proper tournament...?
Does the World Cup feature as the "World Cup"...?
Are any european domestic leagues featured i.e Zurich Premiership or Celtic League...?

I'd love to be able to play as Connacht as opposed to constantly having them chopped off like the leper of Irish Rugby... or attempt to take Worcester to the Premiership ***le ... as opposed to just selecting the big boys of the domestic game!
... perhaps a broader selection of european club teams as opposed to the 32 in the Heineken Cup, such as Pro Evo Soccer 3 had with its mixture of greater and lesser clubs across europe - this would give you the chance to create a custom "Challenge Cup" competition and widen the appeal to fans who don't support the seemingly everpresent teams in the Heineken!

The world rankings show Portugal and Chile in the top 20, will they have a chance to feature in the game... what about other lesser teams like China and Russia, with the ability to create you're own tournaments... competitions like the Super Powers Cup with the bigger Japan & USA and then Russia & China aswell, or the Churchill Cup in Canada could be possibilites...
...a few more teams and the possibility to tour them adds some extra longevity to a game... or is that just me?

Will there ever be a game (that is good???, I'm hopeful of this at some stage) that allows the ability to go on a tour something similar to what WCR had, but enables you to select a touring team, 1 or 2 national teams (within a region) as main competition and then also the extra games in between the tests against club sides? ... doesn't strike me as very hard to implement as it is just another form of custom competition that allows you to arrange the fixtures?!?!

P.S (what about the Barbarians and Pacific Isles team?)
N

nice first post where did u see the british lions
R

thought it was Wales at first, but you'll notice the jersey has the 3 stripes of Adidas and a Zurich (Z) logo on the jersey front...
U


After that, look for Cricket 2006 later in the year! flash new site too. and updated super 12 jerseys. Also a great shot of muddy players 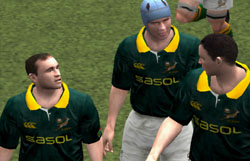 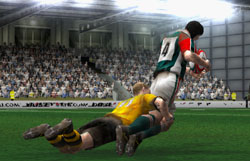 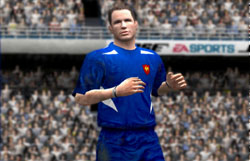 first shot of lineout and lions 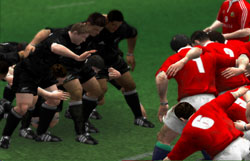 They look awesome, if you squint at that lineout you'd think it was real
N

They look awesome, if you squint at that lineout you'd think it was real [/b]
Click to expand...

oats i luv the look of that dive from the british lions winger too those scrums look beauty and i cant wait to see this haka, and online play oh my god it beta be in if it is it will be the only game i play for at least a year
R

There was me reckoning everybody had seen these screens before ... just thought I'd stumble over HB's rarely updated site... and low & behold it was all jazzed up!

seems to already strike a more positive chord then R2004... which can only be a good thing!
U

Yeah that site is really flash, compared to the old one - hopefully they jazz up the interface like that!
N

i want 1 of those brumbies jerseys they look cool

look at catabury's fullback and which direction he is facing
U

look at catabury's fullback and which direction he is facing
Click to expand...

Yeah true, but how do you know hes not just about to turn around? hehe we don't
N

look at catabury's fullback and which direction he is facing
Click to expand...

Yeah true, but how do you know hes not just about to turn around? hehe we don't [/b]
Click to expand...

maybe sumones making fun of him in the crowd and he is going to beat the beat the **** out them... we dont know that for sure either do we
J

I'd he's just running back because he's always a certain amount of distance behind the line, and because their guy is moving forward he has to go back, once he's broken that line (like now) he'll turn and meet them. I think that happens in other games.

I hope there are more field markings (like tournament logos), but there probably aren't.
U

Originally posted by JJ-@Jan 9 2005, 04:29 PM
I'd he's just running back because he's always a certain amount of distance behind the line, and because their guy is moving forward he has to go back, once he's broken that line (like now) he'll turn and meet them. I think that happens in other games.

I hope there are more field markings (like tournament logos), but there probably aren't.
Click to expand...

At least there are number markings this time
N

Screenshots look awesome,we'll have to see how the graphics look when ingame tho,could be a whole different story
N

those are in game, was that language neccessary? not at all!
U

Yes they are ingame but is that what it will look like? probably not - as the camera views don't allow you up that close unless its a cut-scene
K

Originally posted by neh@Jan 9 2005, 03:18 PM
look at catabury's fullback and which direction he is facing
Click to expand...

Fair comment, but lets be honest its easy to notice when studying a screenshot. When playing it wouldnt be as apparent and as long as the guy turns around and does his job as he should it wont matter.

I think in any game with the complex AI companies use now you are always going to get some unpredictable results even if only for a split second. That guy is probably taking in to account where every single player on the field is at that given moment. The AI probably decided the best thing to do was run away

So far we are certain of :

Those are all pretty likely, but what do u think of the chances of comps like, NPC, Celtic League, Currie Cup, Pacific Islanders?

S
When can we expect WCR 2

F
when can we expect a new video locks?