Hey Everyone!
Just want to wish you all a very Merry Christmas!
Il sure enjoy mine, my first COLD xmas is 17 years! A big change for me. :yahoo:
From good old BBQs on the beach, swimming and sunshine to Frost, Roast and Gas fires! EXCELLENT!!

Anyways have a good one!!

Merry Xmas Jorgie.
I still can't believe how quick it has come. Only felt like the other day I went through the last one.
N

Welcome to the stage when you're no longer a youngster... Still feels to me like my birthday when I played golf then went up the pub and saw England beat Argentina was yesterday, all of a sudden it's Xmas.

(For those of you thats wondering, that was March 1st)
G

Which year was that Teh Mite?
G

I am guessing that would be this year and that he was talking bout footie not rugby!!!
O

Christmas is going to be brilliant this year!!!
P

Merry Christmas all you guys!
S

HAPPY CHRISTMAS!
Sorry to post Christian Scripture on here, but this always gives me goosebumps. So, if you think I'm out of line, pass it by...if not enjoy it and your day.

I wish you all a very Happy Christmas. I love you all, and hope that we find ourselves having a peaceful 2007 full of loads of great Rugby (for it is the game they play in heaven!).

It's 8:30 and I'm watching the Rugby Club waiting for my wife to wake up, so I can dig into the presents!!!
WooooHoooo! I love Christmas!!!

1In those days Caesar Augustus issued a decree that a census should be taken of the entire Roman world. 2(This was the first census that took place while Quirinius was governor of Syria.) 3And everyone went to his own town to register.

4So Joseph also went up from the town of Nazareth in Galilee to Judea, to Bethlehem the town of David, because he belonged to the house and line of David. 5He went there to register with Mary, who was pledged to be married to him and was expecting a child. 6While they were there, the time came for the baby to be born, 7and she gave birth to her firstborn, a son. She wrapped him in cloths and placed him in a manger, because there was no room for them in the inn.

8And there were shepherds living out in the fields nearby, keeping watch over their flocks at night. 9An angel of the Lord appeared to them, and the glory of the Lord shone around them, and they were terrified. 10But the angel said to them, "Do not be afraid. I bring you good news of great joy that will be for all the people. 11Today in the town of David a Savior has been born to you; he is Christ[a] the Lord. 12This will be a sign to you: You will find a baby wrapped in cloths and lying in a manger."

13Suddenly a great company of the heavenly host appeared with the angel, praising God and saying,
14"Glory to God in the highest,
and on earth peace to men on whom his favor rests."

15When the angels had left them and gone into heaven, the shepherds said to one another, "Let's go to Bethlehem and see this thing that has happened, which the Lord has told us about." [/b]
Click to expand... 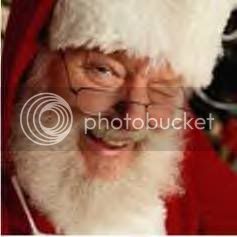 This is a weirdly cool christmas for me...

I got a bumper 8 DVD pack on English rugby! Including the 2003 RWC review DVD and the top England XV DVD!

I got a few smellies, a new MP3 player, a chocolate orange, bit of money thats about it really, oh...and a world cup clock that plays the sound clip from the final 30 seconds of the RWC final 2003 (i.e dropgoal)

I miss my fiancee and Northampton way too much and I'm just getting treated like **** here and I just wanna go home.

For the first time ever I didn't want xmas to happen.

oh, and my dad got a 360 when he didn't even want one that badly unlike me who was left without one
S

I can't drink, I'm in pain and I can only use one arm.

Actually had quite a nice xmas though, all things considered. Got myself addicted to Lego Star Wars 2 since my younger brother got given it. I guarantee playing it will make you smile, some lovely touches for everyone who grew up when just the original films were around.
S

I hope everyone had a great Christmas, as New Years is right around the corner. I hope this year was everything people wanted to be, make sure to make a good New Year's resolution next year <_<
S

Gone from not being able to even laugh because any movement hurt (made watching some TV difficult, believe me) to being able to cope without any painkillers.

Surgeon is rated as one of the top shoulder specialists in the country so I'm pretty confident it will turn out well. Just got to wait until the end of January before I can resume nrmal two-handed life again.