McAlisters gonna miss the semi, so its a Sharks Home Final, see ya all when the Tri Nations Start

The Blues turned around in Sydney and headed back to South Africa today without the player who had a key hand in steering them into the Super 14 rugby semifinals.
SUPER 14 STANDINGS


All Black Luke McAlister, who was making his first appearance after breaking a cheek bone a month ago, strained a hamstring in the 33-6 win over the Western Force in Perth on Friday night.

The second five-eighth will have treatment in Auckland, with team officials hopeful he will fit for the final if the Blues get past top qualifiers the Sharks in Durban next weekend.

McAlister's kicking and the option he gave as an additional playmaker were to the fore as the Blues beat the Force to make the playoffs for the first time in four years.

Assistant coach Joe Schmidt said it was disappointing to be without someone with McAlister's influence for the semifinal.

"Luke may be okay if we get one more week out of this tournament," he said.

"He was really good coming back in. It would have been great to have him. He's a bit of an essential part of our game, but there's some good guys within the squad who will no doubt step up."

The Blues had travelled from Perth to Sydney to await their next destination as the make-up of the top four was confirmed by matches in South Africa early this morning.

Having been in the republic before going to Western Australian, they had hoped to continue their journey home by being drawn with the Crusaders.

Instead, the Crusaders are also off to South Africa, to take on the Bulls in Pretoria, with both semifinals being scheduled for Sunday morning (NZT).

Schmidt said having to undertake another 14-hour flight was not ideal preparation, but it was also "just part of the job".

"The players are reasonably upbeat," he said.

"It's probably not great timing for us having been on the road for the past three weeks and being half-way home.

"But it's the first time we've finished in the top four for a while and we want to give it our best shot, so there's more positives than negatives."

The Sharks beat the Blues 32-25 at Auckland's North Stadium last month in a bruising encounter that began a three-match losing streak for the then competition leaders.

But the home side felt hard done by with two of the opposition tries, while the third one was the result of an error.

Schmidt doubted the Blues would make any significant changes in game plan for the match at Absa Stadium.

"The Sharks played pretty well that night, but we also felt they didn't have to work too hard to create the tries they got," he said.

"A couple of the calls went their way for the first two and the one in the second half was a charge down. I'm not sure we will go too far away from how we tried to played through the season." [/b]
Click to expand...

yeah i saw it in the news. huge blow for the blues. has sam tuitupou recovered? personally i would like to see howell at 10 and nacewa at 12. but if sam tuitupou has recovered i doubt that nucifora will bring in howell.
G

Without MacAlister the blues will have to dig deep...very deep.
R

The Blues will need to play the way they did in round one against the Crusaders. A total team commitment....they aren't the flashest team around...but they can win on guts.

As for the Crusaders.....they have gotten worse every week....they should have never put their AB's back in lol!
C

bad bad very bad news for the blues aye i was giving them a chance of taking it out, but then uh-oh!!! I'm doubting it now lol

wow that is a big blow for the blues. mcAlister was defintely runing the show against the force and was playing really well. not sure if the blues can get the win over in SA now. hopefully they can pull off a miracle somehow
J

It is indeed a terrible blow.

I think now is the time to play a more conservative game and bring in Holwell. Shift Nacewa to 12.
D

Fingers crossed to see Holwell at 10 and Nacewa at 12... hard ask for the Blues to get on top of the Sharks.
R

McAlister missed the Round Robin game didn't he? We still managed to come close to beating the Sharks - take away the 2 bullshit tries and we would've cruised home... but there is a difference playing in front of 25,000 Blues Fans and 50,000 South Africans after yet another 12 Hour Flight.
W

and williams has been sent home for behavioural issues.
C

i hope Jonathon Kaplan (is that his name?) refs the game hahaha

anyways i thought the blues flew out to SA yesterday?
R

and williams has been sent home for behavioural issues.
[/b]
Click to expand...

More time to prepare for the All Blacks I guess.
M

Thats just fantastic. Really it is.

I just hope the All Blacks win the World Cup, so it can erase all the pain in this years Super14.

For the first time, we could have an All South African final. A sad day for NZ Rugby. Almost as bad as the 2001 season.
E

i hope Jonathon Kaplan (is that his name?) refs the game hahaha

anyways i thought the blues flew out to SA yesterday?
[/b]
Click to expand...

they may have gone by now but they flew to sydney after their game against the force because they didn't know who they would be playing.
W

kaplan isnt refereeing as they have nutreal refs and touch judges in both games. they were announced yesterday i cant remember who they are though.
J

Stuart Dickinson is controlling the game. This is the same f'uckwit who controlled the game in Albany Stadium a few weeks back.

I'd rather have a South African ref than having this dimbwit, clueless, *****-ass, dumb arse of a ref.
Q

Stuart Dickinson is controlling the game. This is the same f'uckwit who controlled the game in Albany Stadium a few weeks back. 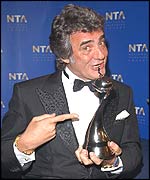 I would have preferred the "Best" ref to a "Neutral" ref. If it means Jonathan Kaplan controlling it, then yes.
M

I agree. Or at least get a ref from the Northern Hemisphere :\

A
Oh These Rough Referees