Now onto the rugby...Scotland decided to give Italy a 21 point head start at Murrayfield. It was ludicrous, three interception type break-away tries (all this in the first 6 minutes). They rallied well but Italy defended like trojans. They gave away a tonne of penalties but because of the deficit the Scots had to go for the try instead of taking the three points. Ultimately the Italian pack held out comfortably for their first away win in top level rugby. Great to see how much it meant to them 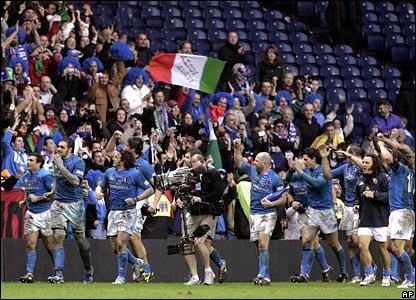 And so to Croke Park. Words fail me on how to describe the dignified pride shown by the Irish fans. They warmly applauded England onto the field, respectfully observed our national anthem and them roared their own. 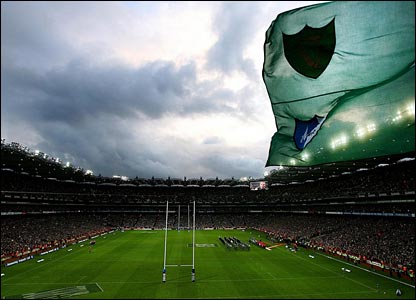 The game was, in truth quite one sided. England competed but they were in defense for basically the whole game and they couldn't live with Ireland's quality. There was only one team in it. A historic, richly deserved victory for the Irish including a great Shane Horgan try from a superb cross-field kick. They must be gutted that that one slip-up against France has robbed them of a Grand Slam. 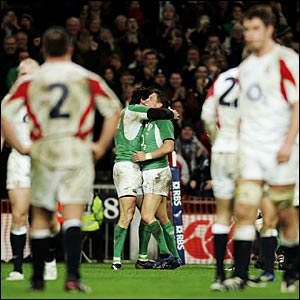 Onto Paris. Wales stunned their hosts with two early tries....but then the French woke up and came hammering back at them. They look to be well clear at 29-14 but Wales kept on at them. Impressive performance but our Gallic cousins and a Grand Slam in the offing? 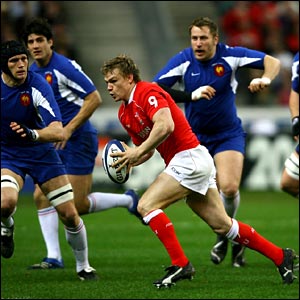 Great, great day of rugby. In review it's disappointing to see England pummelled like that but realistically the game went to form. People seem to think the English are always talking about their Grand Slam prospects like they are a foregone conclusion but it really isn't the case. We are in transition, we are moving in the right direction but it's come far too late for the world cup. Basically we've treaded water for the entirety of the Andy Robinson era...anything we can get going now will surely be too little too late. It's sad to see what's happened to the Welsh after their tremendous Grand Slam season. They now sit bottom of the table which strikes me as harsh but them's the breaks. Regardless of what happens for the rest of the tournament Ireland and France must be pretty happy. Ireland have really quality, strength in the pack, and a midfield that's truly world class. France are looking very, very efficient. You couldn't begrudge them a ***le and a grand slam if it comes. They are suffering loads of injuries but they look very, very good.
R

:bravo: Very good article the azzuri where exemplary and France i think will win the grand slam and i hope they do.