Added the massive and impressive work of Fraser Davidson : All official international and representative kits !
D

Oops, I updated the international pack, I forgot to include namibia.
D

they dont look too bad really, if i do say so myself. to be honest they are not absolutely perfect.....BUT THEY WILL BE. when i actually have the game im sure it will be easier to check the kits and get them all spot on. i will also sort out the numbers and team logos and then well be rockin
S

Put the file in your r2k5 root directory. If you dont like it, delete it.

Secondly, myself i have a website, and Dharf's kits will be put up with preview pictures.
Click to expand...

Fair enough. Thanks. When I say install, I knew you didn't actually have to. Obviously. Perhaps.

when you have installed the player editor where do you actually go to change the stats of players? i assume you'd be able to do this in squad management?
E

fantastic work and full credit to those modding and editing the game. I will hopefully get the game soon and might have a look at the moddin/editing side of things after I have a game or 2.
L

Last night I successfully found all of the kit backs (with numbers on) for a given team using the following method:

Download a program called FileMon
Run It
Set the filter to include "*.fsh" and only show "file opens"
Run Rugby 2005.
Select a match between 2 teams you want the kit backs of.
Crank injuries and fatigue up to the max so more subs are needed.
Play the match, and sub all of your available players on, and hope the CPU does the same (if you have 2 players this is easier)
Quit Rugby 2005
Look in the FileMon monitor window and you can see all the .fsh files that were "missing" from the Rugby 2005 root directory.
Kit numbers will be in there somewhere
This also includes things like team logo graphics, stadium textures, etc.

Save the Filemon log to a file and work out which file does what, and then let the world know!

Damn, filemon, I didn't think about it. Nice !

I played a bit with the logo files. I modified one, and I think there are two separate logo files for a given team (menu logos and match logos in fact). I only found the match logos ones (in the second post list).
S

I played a bit with the logo files. I modified one, and I think there are two separate logo files for a given team (menu logos and match logos in fact). I only found the match logos ones (in the second post list).
Click to expand...

There is a logo for team selection in "Play Now" mode, which is also used always when selecting the team to control (pushing keyboard right/left).

There is also a logo in a different pack for each competition. These include the team logo used in menus (with transparent grid thing behind them), logos used in the match, and also the little flags in the score box in the corner.

I have managed to change that thing that flashes across the screen at a dead ball from an EA sports logo, to a BBC logo.

I am going to change the pitch-mats if anyone reckons that's worth doing? Let me know.

Trying to find the TV overlays too.

If I find them, I will make a BBC patch. I'm sure all you Aussies out there will be after a channel 7 or 9 or whatever patch, and I may make one of those too.

My word it is boring going through all those bloddy fsh files.

hehe. If you find the overlays, share the knowledge

if anyone has images of the channel they want ie bbc sky sports channel 7 etc post here and can vectorise for high quality have bbc logo as did work for 1Xtra if you want chestnut?
L

Well I've worked out what font you used then! Gill Sans MT?

I'm not sure that textures are actually used for the TV overlay, which is a problem.

The thing containing the match time has a texture behind it, you can tell, but the rest of it looks like it is being drawn by the program itself - there is no antialiasing on the corners of the TV overlay.

I think I better wait and see if I can find the files first before and then I'll bother you for some graphics, fraser.

Added the Biarritz home kit perfectly made by lehuit. 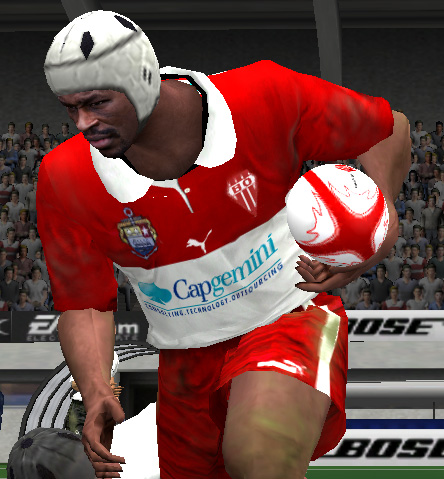 alliteration, or what
K

but he's so much cooler looking. plus, he's fijian. and maybe i think that brian lima sucks at offense....? no actually, he's awesome. ill change my sig in a few days if it maks you happy.
K

na dont change it just because i said i hated it

but the truth hurts
N

no, getting punched in the face by a ninja hurts. ha!
K