So anyone excited about that one? I guess not many in Sydney/NSW heh heh...
Anyways I do not support townsville normally (cairns-townsville isnt really a love story) but I will for that one.
Should be a cracker of a game. C'mon Cowboys!

I'm excited for an all Queensland Grand Final. It should be a cracker.Although I want JT to accomplish his goal of winning a Premiership with North Queensland but my prediction will be that Darius Boyd or Corey Oates will score the winning try. Score 24-22 Broncos. You just cant beat Wayne Bennett's Record 6 Grand Final Appearances and 6 Grand Final Wins. The Clive Churchill Medal will either go to JT or Corey Parker. Should be a good game and a superb atmosphere at ANZ. Can't wait
M

If the broncs win this guy at work won't shut up for weeks... Please cowboys write history!
What a day of rugby for tomorrow first england for breakfast and then NRL GF at beer time. And I aint working!
E

If JT steers the cowboys to a premeirship does this make him the GOAT? Taumalolo or Morgan to get the Clive Churchill medal.

ENZED-88 said:
If JT steers the cowboys to a premeirship does this make him the GOAT? Taumalolo or Morgan to get the Clive Churchill medal.
Click to expand...

oh my god I cant believe it!!! What a win! Thurston can make you cry or explode with joy all in within 5 min. Best game of rugby league i've ever witnessed.
Must be such a party in townsville tonight Strand on fire
CONGRATZ COWBOYS
E

Feel so bad for him.

As said amazing game people who don't watch league should watch it. 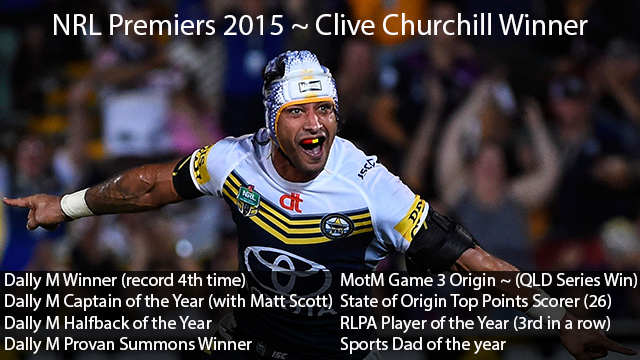 It didn't so changed it to something else lol.

That ending, was like the 2003 ending in the RWC. Even as a neutral you have to admire Thurston so much.

Simply the best final of any game I've ever seen. Amazing. As much as I love Union (and often loath NRL), the RWC final will have to do a lot to match this game.

Wish it wasn't shown on premier sports here in UK would have gotten more viewers if it was on sky or BT.

A dramatic final; the (literally) last second try to square it up, the sideline conversion attempt that was swinging in only to hit the woodwork, the mistake on the kick-off in extra time, the amazing defence to thwart a couple of field goal attempts, and the drop goal to win it by the world best layer - could you ask for any more a final.

I didn't have a dog in this fight, but I'm really happy for the Cowboys who have previously been shafted by poor refereeing decisions that have knocked them out including the infamous seventh tackle try in the qualifying final in 2013.

However, I dislike "golden point". Too often it becomes a lottery. I propose instead,


1. A full 5 minutes each way of extra time
2. Golden Try
3. First team to get a three point lead
4. Silver scoreline - if either team is ahead at half-time in extra time, they win

Still can't get over this game... Had said to my mate it was all over when they went for the double movement (which would have been a try in Union). Unbelievable way for it to finish though - just incredible and the look of despair on Boyd's face when they went over was delicious. I can't stand the Broncos and am a bit of a Thurston fan, so it was the best possible way for them to win.

I agree with you though Smart Cocky - the "golden point" system shouldn't be used in a GF. 5 Mins extra time each way would have been much fairer...

Also on rules, whilst I get that double movements have to be restricted due to the play the ball, I honestly don't think it should be a penalty... it's an instinctive move and it's not something that's always particularly clear cut. Heck, the Bulldogs beat us in the 2004 GF with what I many thought was a particularly blatant double movement by Hasem El Masri.
M

I keep hearing all the league fans complaining about the golden points, but they seem to forget that the game could have been decided on a single goal kick should have JT not missed his conversion.
It seems to me more a hatred about drop goals than just 'golden points', especially when I hear about 'golden try'. IMHO the drop goal is the correct way to go, I dont see many teams succeeding in putting a try in just 2*5min after 80 min of a GF which has become a stalemate. The replay is the most stupid idea either...
Keep the only use, league still has for drop goals. It was a beautiful contest of 2 teams that were evenly matched, unfortunately there can be only one winner....
E

Anyone else heard they want to make Thurston an immortal before he even retires? I personally wouldn't care less the guy is a champion always has been, but I will be absolutely gutted if they make Thuston an immortal before Lockyer. Speaking of immortals how about Andrew Johns form?... Lol.
Last edited: Oct 6, 2015

Joey... Legend on the field, absolute tool and idiot off it. Such a shame really, but frankly his last little controversy ought to have the custodians of that whole immortal thing questioning whether it might be time to put in a character component.

On that mark though, Thurston will obviously have absolutely no troubles.