I just heard this on the radio and straight away googled it. Apparently Colin's son has already been identified, however it is only a matter of time before Colin is confirmed dead as well.

THE former rally driving champion Colin McRae was killed and his five year-old son feared dead in a helicopter crash yesterday afternoon. The aircraft came down in Jerviswood, Lanarkshire, half a mile from the family's home and burst into flames just after 4pm.

Jean-Eric Freudiger, McRae's agent, said the 39-year-old driver had been piloting the helicopter himself. Also on board were believed to be his son Johnny, another adult - said by locals to be a school friend of McRae - and another child. McRae's wife Alison and their daughter Hollie, 9, were not on board, friends said.

McRae became Britain's first World Rally champion in 1995. He was one of the country's most successful sportsmen, achieving 25 wins in World Rally events and 42 podium places. He was a flamboyant driver, inspiring one the world's best-selling computer rally games.


The helicopter came down within half a mile of McRae's 16th-century home, which has an adjacent helipad. The weather had been overcast, with southwesterly winds gusting to 30 knots and good visibility.

Officers with dogs and torches continued to comb the woodland near the crash into the night.

McRae's wife, a childhood sweetheart and his former co-driver, was taken back to the house under police escort shortly after 6pm.

McRae's friend the rally journalist Jeremy Hart, who flew with him several times, described him as a "very good, very measured pilot".

"Colin regularly flew all over the UK and into Europe," said Hart. "He knew the terrain and conditions at Jerviswood very well.

"As a sportsman he was a true hero. As a driver Colin was misunderstood slightly as being reckless but everything you saw with him came from pure raw talent as opposed to being learnt. He was the Michael Schumacher of rally driving.

"It's so ironic that he should die in a helicopter crash when he had competed and had brushed with death so many times as a rally driver."

LONDON (AFP) â€” Colin McRae, the British former world rallying champion, was expected to be confirmed Sunday as having been among those killed in a helicopter crash at his home.

The 39-year-old, whose name also adorns a successful range of rallying computer games, was believed to have been among the four people killed in the crash, police told AFP.

There were "no survivors" in the crash at Jerviswood near the town of Lanark in southern Scotland, Strathclyde Police said.

A police source said formal identification of the bodies was expected before midday (1100 GMT) Sunday.

McRae, a licensed pilot who owns a helicopter, is married to Alison and has two children Hollie and Johnny.

Police did not say who they believed the others killed in the crash were.

"We can now confirm that four people were on board the helicopter which crashed in the wooded area in Lanark at 16:10 (1510 GMT)," a Strathclyde Police spokesman told AFP late Saturday.

"The bodies were found within the helicopter which is owned by Mr Colin McRae. It is believed he was on board.

"However, until formal identification has taken place we will be unable to confirm the identities of those on board.

"Police are still at the scene where further searches are continuing. Air accident investigations will be carrying out a full investigation into the cause of the crash."

Police initially said the crash wreckage was so bad it was difficult to determine how many people were involved.

The Scottish Ambulance Service despatched a helicopter and three ambulance crews to the scene, while Strathclyde Fire Brigade also had units in attendance.

Police cordoned off the site, which is in thick woods and not easy to access.

Born in Lanark on August 5, 1968, Colin Steele McRae had rallying in the blood. His father Jimmy was a five-time British rally champion.

McRae competed in his first rally on the World Rally Championship circuit in Sweden in 1987, earning his first win in New Zealand in 1993.

He was made a Member of the Most Excellent Order of the British Empire by Queen Elizabeth II in 1996 in recognition of his achievements.

Fans loved his aggressive style at the wheel.

The driving ace is also known for "Colin McRae Rally" a series of racing video games, played on many platforms, which have sold more than eight million copies.

This year's release, "Colin McRae: DiRT", is the sixth game in the series.

"I'm not really a fan of computers," the motorsport icon said on his website.

"Yes, I can play 'DiRT' on my X-Box 360 and I can just about access the Internet, but as for the rest of it, much of it is a complete mystery to me.

"When it comes to computers and electronics, give me 300 brake horsepower, a winding road -- and no brakes, and then you?ve got my attention!" 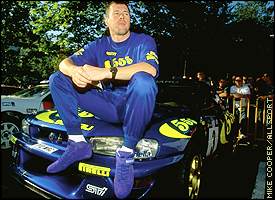 I have to admit I know little of Rally Driving, yet this guy had the ability and the personality to become known to guys like me. Obviously a supremely talented driver and it is always sad to see someone so talented die so young. Sadly made even more tragic by the eath of children as well. My condolences go to the McRae family. (I'm still hoping there is a slim chance he got away but it doesn't sound at all likely.)
D

Terrible News to the World of Motorsport, he was truely the driver who brought Rally to the Masses, especially with his highly successful franchise of games... If and as unfortunately expect to hear the news later today confirming his death the world of motorsport will have lost a huge huge personality, I was lucky enough to see him and have a brief chat to him at Goodwood last year, such a fantastic bloke but also an amazing driver...
S

Sad, sad news. I also got to know of him through the successful rally game franchise.

Condolences to his family.

The following is not meant as a joke, I must stress that.

Isn't it bizarre that he managed to take thousands of hair-pin corners at speed, yet he dies in this way and it's not like there's corners in the sky.

The sad irony of routinely facing death on the ground and losing life in the sky is not lost on me.

Once again, a sad loss.
C

so has he been confirmed as being in the helicopter?

legend of the sport!
M

very sad news, a great loss to not only the motorsport comunity but also to scotland as a nation - a great ambasador for his country and truly represented what most scots are like. he will be remembered throught the world as a great rally driver - but in lanarkshire he will also be remembered for the help he gave to local buisnesses.

he was often regarded as as good a pilot as he was a rally driver - which makes you wonder what went wrong. (although the weather here was abismal yesterday, it wasnt anything out of the norm - conditions he knew well)
S

RIP Colin you were a great one
B

One of the biggest names in all of Motorsport, will be sincerely missed

bad luck, not even in the track
T

When I read this I could not believe it. R.I.P. Colin Mcrae. An absolute legend.