The ICC has announced that Kookaburra, the Australian bat manufacturer, have agreed to the immediate voluntary withdrawal of its graphite reinforced bat from international cricket.


The offer was made after the ICC informed Kookaburra that it had received an opinion from MCC, the guardian of the Laws of Cricket, that the bat contravened Law 6 and, in the MCC's view, was illegal.

With several players in the world - including Ricky Ponting, Justin Langer, Nathan Astle and Sanath Jayasuriya - currently or soon to participate in international cricket matches, Kookaburra has undertaken to re-supply all international cricketers with alternate bats as soon as possible and the ICC has accepted its assurances that this will be done with all possible speed. 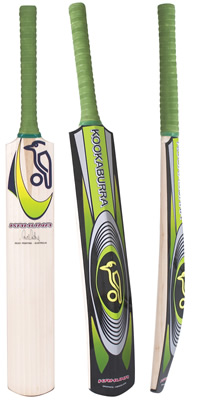 Looks like Astle and Ponting wont be using their fav bats in the near future. Wonder what bats they use, i hope they all dont end up using beasts.
A

this had to happen

its not the athlete - its the tool

Glad they are illegal

the bats are VERY good now days, some woods are more dense than others which makes it better for hitting. but yeah i agree.


but if i can hit a six with my slazenger v800 thats a few years old and needs an oil it must be me, not my tool. I am sure they can use their tool to hit further than me.

It was unfair on everyone else who has a proper bat ie wooden.

I also have a Slazenger V800 thats a few years old. I can still hit the ball a very long way with it and it is still my favourite bat.

The fact is though it is still under the legal weight limit... it's no stiffy - um, forget it.

Maybe it does give the bat more strength but, hey I think it is just for reinforcement. Brett Lee was already a good batsman before he got his woody graphite - he's just got better now.
C

Hmm I wonder why. He is a good batsmen and is strong but I think the carbon graphite reinforcement was just pushing at the boundaries.

i jsut decided to look in this section, i could tell you guys why they recalled them

so if they made the graphite bats with the speed the cricket ball is being thrown at it could be pretty dangerous..

thats just my guess..
A

so if they made the graphite bats with the speed the cricket ball is being thrown at it could be pretty dangerous..

but what they didnt take into account is that these bats were made thinner, and lighter, then added with graphic cover, for qulaity protection

anything in the world of bats or club made thinner and lighter will need some reinforcement to maintain quality....

that reinforcement, will keep the current weight of the new technology, but keep the quality to that of the old standard

thus a lighter bat can be swung quicker, shots bigger

Yeah...but Gilchrist uses the heaviest bat possible ....... and he's the biggest hitter around so...

meh it should just be kept the way it is IMO

im sure you guys have heard of him, babe ruth in baseball here,back in the day, its said that he used a 40 ounce baseball bat, by far the heaviest ever.. well mass x force = speed or somethin like that :lol: but the key thing to remember is thatif you have a heavy heavy bat, and your very strong you can still swing it quick and the amount of mass the bat has combined wit the speed of the ball, it will go far..
S

I've had a few swings with those graphite bats - whilst I would love to be able to use them they do give you one hell of an advantage.
W