Mason says no to $1million in ESL

Last night on Channel 9's The Footy Show, NSW and Australia Second Rower/Prop Willie Mason confirmed he declined an offer of approximately $1 000 000 per season (possibly a little bit more) at ESL team Harlequins. He maintained he wanted to honor his contract which sees him though to the end of 2009 at the Canterbury Bulldogs.

I must say, I really admire him doing this because these days a contract isn't a contract and players are increasingly requesting releases to sign somewhere else. I'm sick to death of players in either code, more so in Rugby League, being bound to a contract that says they have to play at that club for X number of years. Fair enough if the player has to be released on compassionate grounds, but if it's to just sign with another club then I see that as blatantly stupid to tell you the truth, it's a disgrace and something that happens far too often. Good on Willie for wanting to honor his contract. When he comes off contract at the end of 2009, and if he is offered such big bikkies, then he should definitely take it because after all professional sports are a business nowadays, which makes it even more important to honor a contract.
R

I don't really know much about the Australian side of this game, but i've quickly come to dislike this man in general.
However, a lot of respect for the man for sticking by his contract.
I agree, if more players (from both codes) start looking to other clubs to buy them out of contracts they'll start becoming as bad as those Soccer pussies. Season in-Season out getting the high rolling clubs to buy them out of the club with no commitment.
No respect for people who don't honour their contracts.
B

Leaguies aren't know for thier sense, they probably told him that he would probably be arrested over there if he allegedly raped any ladies and they don't sell VB on tap
M

Yeah I dont like the big English clubs trying to steal our players for the big bucks. Well done to Mason though for declining, I respect that.
M

Don't particularly like the bloke, but kudos to him for sticking to his contract.
S

He can go better than Harlequins anyway, with all due respect to them. I'd love him at Saints. Even if he is a twat.
K

As far as i'm concerned, i didn't understand a word of that...
S

Good it's not just me then!
M

Kimmy_The_Kiwi:
"I love Willy Mason, he is dedicated to his club, as if he would ever leave. I am a love sick 14 year old female who has no idea what some of the Bulldogs players have done to females in the past"
A

there is more to Willie Mason that meets the eye people

It wont be long until Mini Willie's are running around

The guy can and will say outspoken comments - which is deemed stupid....but the world would be a boring place if it wasnt for the like of Mundine and Willie - controversy stirrers

I dont really like him......thats based on personal run ins i have had - we both dont like eachother - but we both respect eachother based on the link between us and his GF.

He is a bloody good footballer though.
S

Mason is a ****** of the highesr order!!! i remember when david kidwell lined him up and smashed him in the tri-nations last year. funny as hell.... then we see the boof head talking himself up for the return clash in melbourne then he pulls out just before the game.

the next week he hits stuart fielden with a cheapshot while hes not expecting it. no doubt the pig pussy will go back into hiding when big bad kidwell gets going again...

You gotta admit though.... it was a great shot by Kidwell... what a shiner for the big cat... 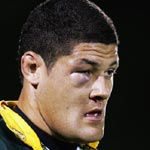 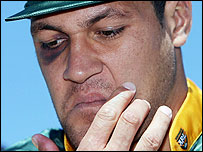 Willie Mason is back...

Slater: I've no reason to leave