No grudge against Woodward - RFU 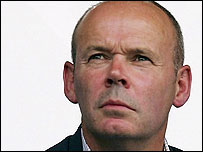 Woodward is currently director of football at Southampton

Rugby Football Union boss Francis Baron insists there was no grudge against Sir Clive Woodward in the selection process for their elite director of rugby role.

Woodward, who led England to World Cup glory in 2003, was highly critical of the RFU when he resigned a year later.

And he lost out to Rob Andrew in the race to land the new role, in a battle Baron described as "very close".

Woodward was an early favourite to land the role, which oversees all aspects of representative rugby in England, having brought home the Webb Ellis Trophy three years ago.

He is now working as director of football at Championship side Southampton.

But many believed Woodward's scathing criticism of the RFU during his resignation press conference in 2004 counted against him.

"What happened, happened," said Baron. "It was in the heat of the moment.

"We decided right at the outset that if Clive wanted to throw his hat into the ring, he would be treated exactly the same as all the other candidates.

"I worked with Woody for six years and we exchanged words throughout that time.

"If every time you have a bit of a row with somebody you hold it against them, you don't go forward in life."

After interviewing 17 candidates, the RFU decided to go for Andrew and Baron believes that the outspoken former Newcastle rugby director will work well with England head coach Andy Robinson.

Baron says Andrew, who has been critical of the Robinson regime, will not have the final say over team selection.

"Rob will be a member of the selection group but he does not have a casting vote," Baron said.

"Andy Robinson is totally on board and very supportive. He is delighted with Rob's appointment.

"He thinks he will have an excellent working relationship with Rob and Rob feels the same way."

B
RUGBY AGAINST CANCER