At least it's not branded!
N

Oh I agree Grey Worm clearly does not give a duck and understandably so. Doesn't mean his behavior is 100% unhelpful to the situation

I guess the point is why does he need to be helpful?
He helped these people he has no ties too defeat the WW.
N

Lets go over this,

Is Tyrion, really being punished? Nope nobody actually thinks so its 'saving face bullshit'.
Is Grey Worm being a stickler that he isn't being punished completely unhelpful to the situation? Yes
Does he have any reason not to be a pain in the arse? Absolutely not but one does wonder what he hopes to accomplish other than killing everyone.

Don't think Tyrion having sway was unbelievable, he's done so from similar positions before and had a working relationship with a majority of the council. It was a demonstration of his skills as a politician.

Also a lot of this season has posited that the reluctant ruler is better as they're less likely to be corrupted. When Tyrion takes the position of hand he definitely doesn't want it. While saying it's a punishment is a stretch he absolutely sees it as a burden. The same way Ned did.

Agree that this season’s been ridiculously rushed and that that the writing’s gone down hill dramatically. Seasons 7 and 8 could’ve comfortably been expanded to 4 seasons and would’ve been better for it.

With that said and accepted, I really enjoyed the finale. I went in with ridiculously low hopes but I’m satisfied with the way the stories ended, just not how they got to those endings.

Drogon nudging Dany’s body trying to wake her up, the Stark kids saying good bye and the montage of the Stark kids going off to do their own thing all got tears out of me.

The episode definitely had some flaws but it hit enough of the right beats for me to be satisfied with it.
N

Let's face it Robb Stark was the Perfect King
Him with Jon as the Kings hand.

Oh what could've been. 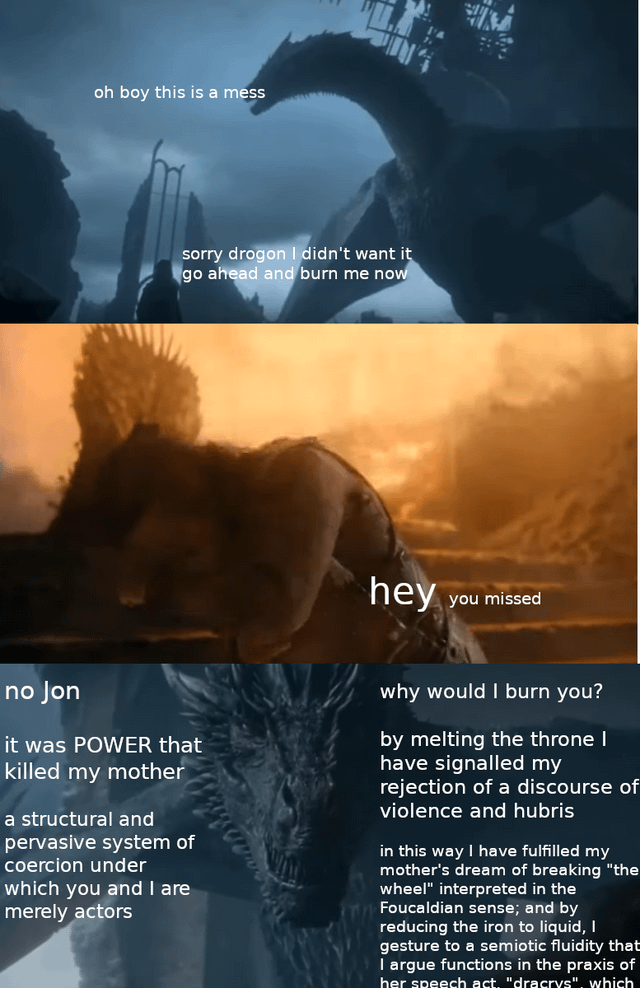 I liked it. Good ending I thought. Glad Ghost finally got the recognition he deserved.
Last edited: May 20, 2019

Wasn't as bad as expected, but not that good.

Thought it started well up until Jon killed Dany (didn't expect it to happen so early on, so it surprised me). After that it fell off a cliff for a bit, hated the voting bit - Sansa should have been made Queen. Also no one batting an eyelid at her saying the North should be free - surely at the least the Ironborn would be like "Hey me too!"
Quite liked the last few scenes - though Arya just randomly sailing off, and Jon deserting the Nights Watch, wasn't my cup of tea.

Also as much as I like Bronn, him ending up Master of Coin was.....dumb as hell. I thought he was gonna be commander of the city guard or something when he showed up.
Last edited: May 20, 2019

One thing I did not like: the Dothraki their story thread was just left unfinished. They just accepted the council’s decision? And didn’t demand Jon’s head?
N

The_Blindside said:
One thing I did not like: the Dothraki their story thread was just left unfinished. They just accepted the council’s decision? And didn’t demand Jon’s head?
Click to expand...

The dothraki haven't really had any plot or character in how many seasons?

The_Blindside said:
One thing I did not like: the Dothraki their story thread was just left unfinished. They just accepted the council’s decision? And didn’t demand Jon’s head?
Click to expand...

****** me off that they just skimmed over the finding out Daenerys is dead part.

Why wasn't Jon killed on the spot by either the Unsullied or the Dothraki?
Why didn't the Dothraki start raping and pillaging across Westeros? The only thing keeping them together was Daenerys. They literally showed them running down women and children in the street one episode ago, and now because Tyrion (who they should want to kill) has named some kid they don't know as King they're just milling around in the city living as normal folk now? 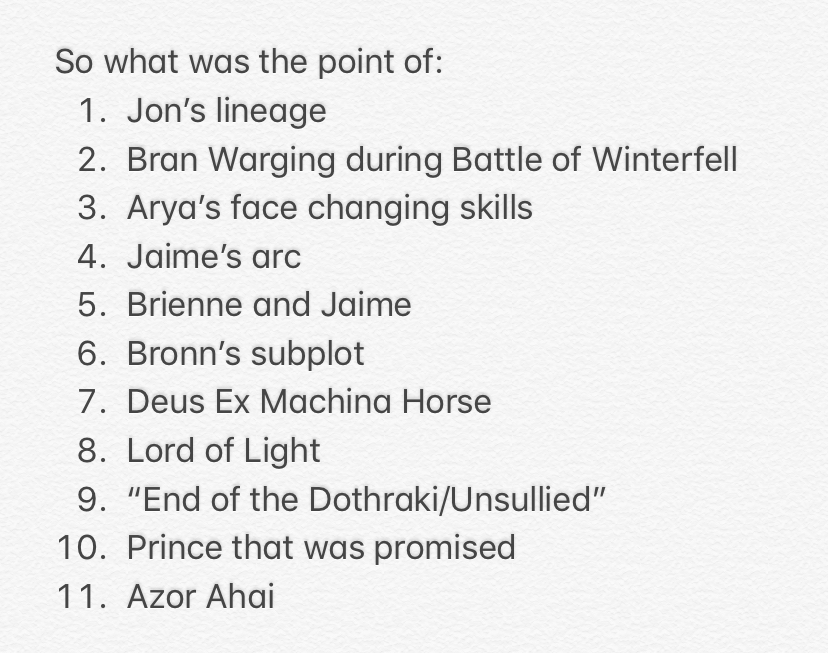 It’s a sprawling epic not everything is going to have a point or be super important. Some of those are hardly on the same footing either like the horse? They probably thought it made a nice shot, it’s a bit silly but hardly a plot point. I don’t feel the show ever really had any focus on the prophecies and there’s a pretty good post on reddit about how Jon matches up with Azor Ahai. Bronn’s storyline this season was **** they clearly had no idea what to do with him. Fair play to him for being the one who rose the highest though.

ncurd said:
The dothraki haven't really had any plot or character in how many seasons?
Click to expand...

Since Dany burned down the house of Khals. And the Long Night seemed to suggest the Dothraki were wiped out by the dead. But Dany managed to hold some back somewhere to fight and pillage KL.

Yeah the Dothraki not demanding Jon’s head for killing their Queen doesn’t make sense the more I think about it. The Dothraki are savages they should have been hell bent on revenge for the killing of their Queen. Their Khaleesi.

So even though I’ve been a fan since season 1, I’ve purposely avoided this thread until now. Obvs there has been a lot of hate for this final season and some of it was definitely justified... BUT regardless of all the fan outcry over this finale I personally thought it was a great episode, probably the best of season 8. Having been super-geeky about many (MANY) entertainment sagas over the years, if there is one thing that rings true is that ending something that is beloved by many is very difficult to do in a manner that satisfies the majority. After a so-so final season (and having read the headlines all day that fans were outraged) I came out the other side thinking that tonight’s finale was a more than decent attempt to close of a phenomenon.

1. to make danny self-conscience, unstable, unloved so she would go mad
2. just to see if he could find the NK, really dont get why everyone thinks there is something more to this
3. to kill the frey's
4. to show some people, no matter how much they try, cant shrug off who they are
5. to show Brienne there are people out there that will accept her for being her, also to make her a knight
6. ...wasn't really much of a plot...but yes..they seem to have lost what they were doing with him
7. agreed, weird...didn't even see it carrying her out of the city or somehting
8. agreed....we have proof he is real...and actual god that gives powers to people on earth...maybe he just lost interest
9. i just assumed they were only there for danny and so after they left...they just wanted to go home
10. ...more lord of light stuff left unfinished
11. whats that again?
12....100% agree, i thought we were going to see Jon about to be executed and all the lord of westeros come in to save the true king, even ig he did shrug it off later

just my read on things

my only real hang ups are the NK/WW's not being the big bad in a book called a song of fire and ice and a tv show with the tag line winter is coming...was there fine print "but it wont be too bad"
the lord of light? is the lord of light and death the same "person", red lady seemed to know about telling him "not today"
Share:
Reddit Pinterest Tumblr WhatsApp Email Share Link
Top