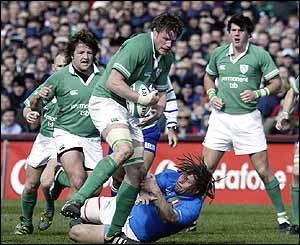 Ireland second row Malcolm O'Kelly has signed a new contract with Leinster until the end of the 2008 season.

The 31-year-old O'Kelly is the most-capped player in Ireland history with 75 appearances since his 1997 debut against New Zealand.

"The next couple of seasons with both Leinster and Ireland are going to be very important," he said. "With the new coaching set-up in Leinster and the 2007 World Cup fast approaching, I think these will be very exciting times for the province and the Ireland team."

Leinster chief executive Mick Dawson added: "I am delighted. Malcolm has been a stalwart since making his Leinster debut in 1995 and is internationally recognised as one of world rugby's finest second rows.

"He has been a true leader both on and off the field and his commitment, followed by that of Brian O'Driscoll recently, is another massive boost for Leinster Rugby."
A

Great news all round, he could have gone back to England, got a big pay day but Leinster couldn't afford to lose someone of his calibre especially when losing Shane Byrne and Shane Jennings last year, although in fairness Blaney and Gleeson have filled their gap superbly.
L

what the hell happened to shane byrne, one moment hes a british and irish lion the next minute hes not starting a club level!
C

the sands of time has caught up with him!
L

thank you oh wise man...did any one see his throw in against one of the provincial sides, he was 1m in from touch and the touch judge didnt pick it up!!! well anyways im a hooker and it made me laugh.
C

ah simply he got shafted by Leinster as they wouldn't give him a decent deal. He didn't want to leave but he has a family to look after and all that, plus he was a great servant to them for many years.
L

saracens must be crazy, they had ibanez, who is now declining aswell thought...
C

Ibanez left for Wasps around the same time Byrne joined. They have some young english guy hooking for them now.
L

i know that was my point.
A

It was lousy the way Leinster treated Byrne, he should have been given a decent deal by the IRFU, at the very most it would have been a 2 year deal, that's hardly going to break the bank, least he deserves after over 100 appearances for the Leinster and however many caps for Ireland.
C

i went along to the ireland under 21 vs leinster A match a few weeks ago. It's amazing how much money every year the Leinster branch waste employing some of those guys. O'Meara, Hepworth, Burke, Norton etc. What's the point?
A

Hepworth is a useless *******, cost us the win against Bath in the RDS with his ineptitude
C

ya he's muck alright. He won't be around next year i'd say so.
A

Why the **** did we waste money on bringing him over, surely there were far better options available than that clown, he even managed to make himself look cack in a 62-14 win over the Borders.
C

dave mcallister has been sent to munster. imagine being behind that chump hepworth.

I firmly believe signing Hepworth has been the only wrong thing chieka has done this season. the byrne fiasco was the branche's f*** up.
E

Hepworth is awful. He can toss of back to rugby league and let any of Norton, Brown and Eoghan Hickey who are all better players.

When did McAllister go to Munster Cavan?
A

Don't think he's gone yet but it seems to be a done deal, been in the offing for a while especially when Manning broke his arm.
C

yeah one of the Blaney brothers are heading down south too they reckon.
A

Thought it was James Blaney not one of the Blaney brothers at Leinster?
C

yeah Blaney is coaching Terenure's AIL team at the moment, not sure about that one. Chieka should dump Hepworth and develop Jonathan Sexton are the next 10.
Share:
Reddit Pinterest Tumblr WhatsApp Email Share Link
Top