One tournament to rule them all 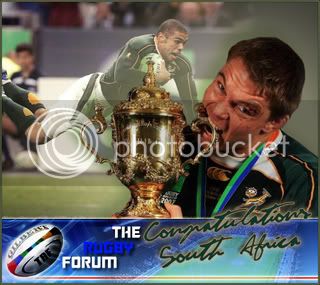 </div>
After 24 games, 1920 minutes or over a million spectacular moments of rugby, the dust has settled and the new world champions have been crowned. What a World cup it has been.

From the off this world cup has been the tournament of the underdogs, Argentina shocking the world and laying down a marker by crushing hosts France on the opening night. When some may have thought that was their tournament done with the big moment achieved, they did it again against Ireland to send them out altogether! Who knew what was to come for Los Pumas?!

Not to be outdone in the group stages however, many of the worlds emerging rugby nations produced sensational displays to steal the spotlight; Georgia pushing Ireland to their limit, Tonga coming within touching distance of victory against the Springboks and holding a lead over England for a bulk of their game, the amateur stars of Portugal shining brightly and bravely against the All Blacks & Romania and finally Fijis late, late score which sent Wales spectacularly crashing out of the tournament.

And the IRB believe the "minnow" nations don't deserve a place on the grandest stage of them all. Pah.

Come the knockout stage, everybody (this author included) expected Australia to spin the ball around England ageing pack and outrun their cumbersome backs, although Brian Ashton and his men had different ideas. Depending on what hemisphere you come from it was either a perfect display of power rugby or a boring display of kick and disrupt, but England somehow overcame what many thought of as insurmountable odds and picked up the win (by the look on the England players faces as the whistle went, you'd be forgiven for thinking they'd won the whole tournament!)

If that wasn't enough however, what was to come that afternoon could never have been imagined in anybody's wildest dreams; Tournament favourites New Zealand faced France in the closest possible location to a neutral venue, Cardiff, in a game expected to be a walkover. After an early 13-0 lead following typical New Zealand flair and style, the All Blacks looked to be cruising when the French did what they do best… They woke up and decided to play! With about 20 minutes to go, Freddie Michelaks introduction to the game provided immediate rewards when a breakaway and dubious un-noticed forward pass resulted in a French lead, which they held until the end. Could the AB's have done gone all the way simply by taking the drop goal instead of insisting on scoring a try? We'll never know, but by God the underdogs had done it again!

South Africa were also given a fright by Fiji in the third QF. After a good early spell and with a healthy lead, the Springboks took their foot off the pedal. However even with one man in the bin and missing key playmaker Nicky Little, the Fijians showed great heart to run in 2 tries in 2 minutes to bring the game back within their grasp on the stroke of halftime. South Africa had to dig deep to rescue what could have been the game slipping through their fingers, turned up the style and eventually ran home comfortable winners after the islanders simply ran out of ideas. Fiji could hold their heads up high however, their performance was more then they or anyone else could have expected from them and they'd earned respect and admiration worldwide.

The only straightforward QF of the tournament was Argentina's comfortable victory over Scotland. Despite the perfect right boot of Chris Patterson, the Pumas orchestra and their conductor Hernandez never put a foot wrong as they cruised to victory over the tartan army.

Come the Semi-Finals, the form book normally goes out the window and this year was no exception. Hosts France played defending Champions England in their bid to decide the best team in the Northern Hemisphere, most people backing the cockerel's flair to sidestep the bulldogs brute strength. When Josh Lewsey collected a long box kick and collapsed over the French fullback after 75 seconds however, most if not everybody was dumbfounded! The English again played to their strengths and dictated the pace, putting the French under pressure with many high balls and their powerful forwards demolishing everything in sight, but don't take it from the French; they lead for the majority of the game and constantly looked for interceptions and breakaways, so the game could have turned at any moment up until Wilkinson slotted a late drop goal to seal the game. Somehow, someway, the defending champions who had previously been written off to not get through the group had only gone and made their way into to the final!

The following night saw the biggest implosion of ant team in the history of a world cup (well, since the first half of Wales vs. Fiji at least!). While Boca Juniors vs. River Plate had been delayed so the football loving nations could watch World Cup rugby on TV in Argentina, The Springboks hounded the Pumas forcing more mistakes then you could count on which South Africa, and more specifically Brian Habana, capitalised on. A brace for Flyin' Brian with breakaway tries summed up the game as the Springboks made their class shown against a plucky but ultimately outgunned Argentinean side. Los Pumas may have lost their chance to win the World Cup, but they had won the hearts of every rugby fan worldwide.

For 3rd place, tension frequently overflowed between France and Argentina in the brutal and physical opening night rematch. Neither side wanted to leave the tournament with nothing, but after early French scares being called back for forward passes (Karma, perhaps?) Argentina eventually outclassed their hosts dotting the ball 5 times to 2, dominating possession and territory in the process. Los Pumas signed off in style.

While the 3rd place battle was open and free flowing, both sides allowing each other the space to express themselves, England and South Africa neither had the intentions for such politeness. A brutal, nasty, vicious, dangerous and ugly affair, the Saxons and the Springboks neither could find their way over the whitewash (although a Mark Cueto effort early in the 2nd half was controversially but correctly judged to be out), both side only able to put points on the board via the boot. Bleeding, battered and broken players on both sides littered the Stade de France as the final whistle went, the score line reading 15-6 to the Boks and the new Champions were named and the Rainbow nation accepted their reward of inheriting Billy for the second time, the world looking on in awe as fireworks filled the Paris sky.

Every 4 years the World Cup has set a new benchmark and 2007 didn't fail to deliver. South Africa completed their 12 month resurgence and peaked at the perfect time to claim the ultimate prize, England defied the odds and produced an admirable defence of their crown, Argentina won the hearts of millions across the globe, France won the respect and friendship of millions for hosting such a wonderful tournament and best of all, the Aussies were beaten at the first knock-out stage!

Rugby Le Coup de Monde 2007 was a resounding success. And above all else, Rugby was the ultimate winner. There's one result nobody will debate.
P

GO BOKKE! About time we bring it back to SA. If you're not a SA fan... at least England didn't win it twice in a row.
I

Great summary. Particularly loved the ommission of all things Aussie. I really think you grasped the feeling of the tournament in your review, but you need to edit the scoreline for the final.
Share:
Reddit Pinterest Tumblr WhatsApp Email Share Link
Top