Ulster's all-time league record 12 match unbeaten run came to a halt at Murrayfield on Friday with a 15-20 loss to Edinburgh. The Ulstermen have however won their last seven matches in the league at Ravenhill since Leinster were victorious there 19-24 on 26 December 2005.
The Ospreys have won back to back matches against the Blues and the Reivers, but have won just one of their last five away matches: 44-16 at Connacht on 12 May.
Ulster have won only two of the seven previous meetings against the Ospreys in league and cup, whilst the Ospreys have won on the last two occasions that they have visited Ravenhill.
S 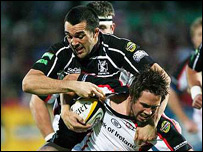