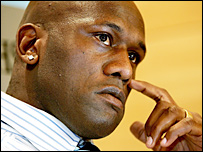 Australia winger Wendell Sailor insists he will return to competitive action once he has served his two-year ban for his positive drugs test.

The 32-year-old said he would like to play in Europe, and also raised the possibility of finishing his career in his original code of rugby league.

"I'd be bitter if it ended on these terms," he told The Sunday Telegraph.

"My career's on hold for two years, but I reckon I could play two or three more years after the ban is over."

Sailor tested positive for a metabolite of cocaine after playing for the NSW Waratahs on 16 April and had been provisionally suspended since 12 May before having the ban confirmed on Friday.

His lawyer said Sailor was still considering the prospect of an appeal.

"I know I don't want my career to end like this," said Sailor.

"I couldn't handle looking at my resume, seeing all my achievements, seeing dual international, but knowing it all finished because of a drug ban.

"Two years out is a long time. The problem will be getting up every day and training hard and trying to keep fit.

"(But) these two years off could help my body. Even the last six weeks I've felt so rejuvenated."

Sailor said he would like to bring his career to a close with his former rugby league side Brisbane Broncos, with whom he won three NRL Grand Finals.

"I've thought about finishing my career at the Broncos and I've spoken about it with (Brisbane coach) Wayne Bennett," he said.

"I wouldn't want to go there on big money. I just want to go back and give something back to the club."

He also said he had been in contact with Australian rugby league stars Darren Lockyer and Andrew Johns.

Sailor, while admitting his mistake, said he felt the lengthy ban was disproportionate to his offence.

"I was hoping for some leniency here because I've never taken drugs to enhance my performance," he said.

"I'm not playing the victim. I've made a mistake, but this was stupid more than anything.

"As a husband, father and a role model I realise I have let plenty of people down, including myself.

"I'd be disappointed if people were to put me in the same category as a guy like (banned Canadian sprinter) Ben Johnson.

"I'd like to come through this a stronger and more positive person."

Sailor won 37 caps for Australia in union, playing in the 2003 World Cup final against England.

Well I guess it is possible for Sailor to make a come-back but sheesh it'd be tough.

No competitive sport for two years, the battle to remain fit, fast and focussed without the professional support and backup. And then trying to get someone or some club to take the risk on a 34-year-old who hasn't played for two years.

If he wants it bad enough it is there for him to take!
K

Lol..i'll believe it when i see it!
S

Yeah, Wendell was way over-rated in Union (much like Ben Cohen), but to say he was **** in League (and by the way players 'kick it away' more in Union than in League) is just silly. The guy went on tour with the Kangaroos in 94' as a 20 year old and tore Great Britain a new anus... The sodomy he inflicted on them continued for years to follow, but it's true that by the time he getting ready to switch he was getting pretty ordinary (though people did say he was just trying to avoid injury before crossing). Nevertheless, he was a devestating winger in league when he was in his early to mid 20s.
R

I saw him playing for Queensland in Brizzy and instantly you could see he wasn't up for it. He hated getting hit and going to ground. I wasn't even a big rugby fan at the time but your instinct know a player who's giving 100% and one who's holding back.