Ulster have flattered to deceive following their opening day performance and in hindsight one can't really read too much into said performance considering how poor Toulouse have been throughout.

No doubt though that the tables will be turned and Toulouse will inflict a ruthless performance on Ulster despite already being eliminated in what had looked like one of the strongest pools but in fact has turned out to be one of the weakest.
S

There'll be a lot of fellas on the pitch named in the 6N squads, so there should be some sparks. And the conditions will probably be great for a match between former champions. But will anyone be watching??
A

maybe those with tickets as it's not being shown on tv.
P

Errr...why did Trevor Brennan and Gareth Thomas decide to brawl with Ulster fans?

Is the Ravenhill crowd really that bad?

An Tarbh, an isight if you will.
A

Not that I was aware of. I'd never heard of any problems with Ulster fans before. Haven't seen anything of this so will wait and see if there's anything on Sky Sports News or European Rugby Special.

Suprised though at Ulster taking offence at someone having a pop at Justin Harrison, the guys nothing but a thug, obviously Brennan is no angel, but Harrison just looks for agro at every opportunity he can get.

Not having seen anything but just read a couple of articles, the fact that Thomas was willing to go into the crowd and confront the Ulster fan suggests something fairly strong was said, I know they're good mates so that's understandable.
P

Hahaha Brennan lamped an Ulster fan right in the jaw and he had to be seen by the Ulster team doctor.
A

Brennan certainly has toned it down big time since he was taught a lesson in the world cup in 99 when he had a go at one of the Aussies. Don't think he's gotten into any serious trouble since he's been at Toulouse. Anyway the programme is about to start so I'm gonna check it out.
D

a testimony from the Munsterfans forum I've just read on the [email protected] board, the guy found it on the planet rugby boards ( :wacko: ) :

Have been on the phone with a couple of friends who were sitting at that part of the stand. They've said exactly the same as Widebody in terms of what was said. TBH even though they're Ulster fans and it was wrong of TB to lose it, their overriding feeling was that they were ashamed of the guy for bringing Ulster fans into disrepute. They had been there since Friday and there had been a great atmosphere all weekend - notably in Trevor's pub. They were in there Friday night and he came in and chatted to Ulster supporters. It's just very sad that the weekend and Brennan's European career should end like this.

This is a wholly unfortunate incident. I know that players are supposed to be professional but there's also no excuse for the supporters. If a guy in the street called someone's mum a whore and got a smack in the face for it nobody would be surprised. I don't see how paying your 20 euro gives you the right to behave like that.
(...)

The fans started chanting 'your mothers a whore', he went over to the barrier and asked them to cop on, all of them did except this one langer. Instead he got louder, so Brennan took it into his own hands to shut him up. Defending mothers all the rage in France these days. Nothing sectarian. Fact, I heard it meself.
[/b]
Click to expand...

View from a BBC Reporter 'who was there' (apparently)

Brennan runs a popular bar in Toulouse and eyewitness, BBC Northern Ireland journalist Julian Fowler said that a number of fans had made disparaging comments about the Irishman's premises.

"A number of the Ulster supporters started to chant, 'Your pub's a load of rubbish'. 'Rubbish' wasn't exactly the word they used but it wasn't that much more offensive that that," said the BBC journalist, who also spoke to the supporter after the game.

"He (Brennan) turned towards the crowd and climbed over a barrier and walked up the steps towards the eighth row where this fan was sitting.

"There was a sustained, repeated attack and I saw at least half a dozen if not more punches using both fists, being rained down on this Ulster supporter.

"The supporter was just a young fellow with a group of friends and I wouldn't have said that he was in any way drunk or aggressive."

The BBC reporter added that the incident had left the supporter's face bloodied and swollen.[/b]
Click to expand...

Furthermore they found and interviewed the guy who got belted:

The supporter struck in the incident is understood to be London-based Ulsterman Patrick Bamford.

"I also spoke to him at the airport six hours after the incident and he said that he was still in a state of shock.

"He didn't know why he had been singled out. He watched Brennan comes towards him and he actually thought he was going to shake his hand.

"The fan told me that he had made a statement to (French) police after the game but he wasn't sure last night what if any action he was going to take because he was still in a state of shock." [/b]
Click to expand...

Can't be too sure I'm afraid. If you did say (or chant) something that got you a broken jaw for your troubles, you're hardly going to say "Oh aye, I slagged off his bar and his mother" to the BBC are you?

EDIT: actually, when you look at the photos, you can see the REAL reason why Gareth Thomas was getting all riled up...

It is maddening how Christmas gets earlier and earlier every year : 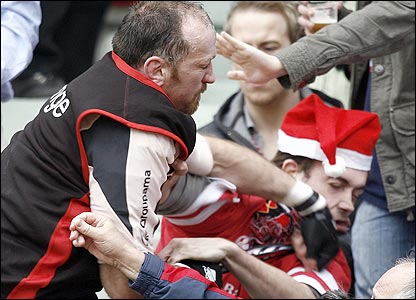 Hard to know who to believe, the majority opinion seems to be that there was no mention of anyone calling Brennan's mother a whore, just that your bar is a load of ********. I know Brennan is a hothead on the pitch but certainly not off it given the countless reports of his hospitality at his pub. The mother's a whore story makes more sense but the majority seem to be backing up the BBC story. Now it's not hard to believe that the fans would cover for each other as it could possibly affect them in future seasons. It does seem to have Ulster fans in quite a tiz though.

I'm sure there'll be plenty more on this story.
D

Toulouse published their part of the story, defending trevor (duh)

They say a group of irish supporters were chanting the "your mother's a whore" tune while brennan was warming up.
As brennan approached, beer was thrown at him. Other irish supporters near the scene stopped the little "disturbing" group ans sided with trevor, calming him down.

Then trevor was got back to his warming-up and one supporter resumed the chanting, that's when he went berserk and punched the guy.

Toulouse says insulting supporters are against the rules and asks the ERC to start an enquiry.

Meanwhile the French Police uphold all that is holy for all those Rugby fans who say "I don't care."

A Toulouse Police spokesman described the incident "as a private matter between two people" adding that they did not know "what all the fuss is about".[/b]
Click to expand...

Trust me, Toulouse has its fair share of dumb policemen :wacko:


Pic of the beer throwing incident in L'Equipe :

Ah...the plot thins out somewhat after seeing that piccie
P

Is there any video of the incident?
A

There's nothing on youtube and the match wasn't shown live in Ireland or the UK, not even sure about France, Canal+ had the rights but they don't seem to have the footage.
D

The match wasn't on tv in france.
B

There'll be something on this Thursdays Rugby Club. I'll look at getting it and ripping some video if I get a chance and there is anything.