Damn you to hell 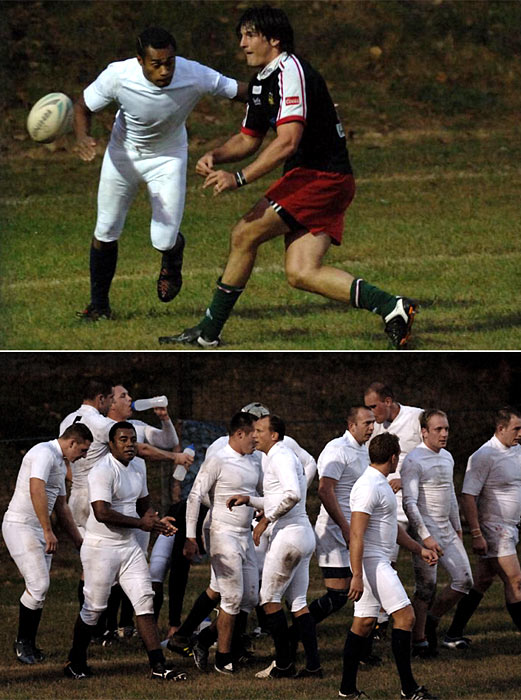 It may look like your grandad's thermal underwear - but this could be the kit Jonny Wilkinson and the rest of England's rugby team wear to defend their World Cup crown next year.

Sportswear giants Nike have been secretly developing the bizarre strip - designed to be impossible for opponents to grab hold of - and have recruited the Royal Marines to help test it.

A few dozen spectators got a sneak preview of the strange designs on a bleak, windswept West Country pitch last week, during a friendly match played under a veil of secrecy.

But for all the supposed advantages of the new kit, the Marines were still thrashed 48-5 by their Plymouth Albion hosts.

The match was given no advance publicity and the kit was unmarked, with not even the telltale Nike 'swoosh' logo as a clue. The Marines' dressing room was declared a no-go area and they were under strict orders to say nothing about the strip, which was whisked away after the match.

But the Plymouth players could barely contain their laughter when they saw their hulking opponents run out in what looked like their long-johns.

Plymouth manager Gareth Jones said: "We are told this is the look of the future. We all laughed when we saw it because it is very unusual. But I understand it will soon be worn by major teams and brought on to the general market.

"The idea is that the gear is so tight it's almost impossible to grab your opponent's shirt or shorts. There is a lifting-bone built into the shorts for use at line-outs, but I have never seen lightweight kit like that on a rugby pitch.

"We knew it was a bit special because the Marines were not allowed to keep the kit or say anything about it. There were no Nike distinguishing marks and all we were told by the Marines was that they were helping Nike in a trial. All a bit hush-hush. Unfortunately, we were never given a close-up look at the kit."

It is not the first time Nike has tested kit with Royal Marines, who previously tried out the strip later worn by the French national team.

Nike would only say: "As a company committed to innovation, Nike is always prepared to experiment with new ideas. Whichever kit is used by England in the future you can be sure it will be designed to help the players perform to their maximum."

Former England star Graham Dawe, who now coaches Plymouth's National Division One team, was 'shocked' to see the skin-tight shirts and knee-length leggings, which could be worn at the World Cup in France next September.

He said: "It was more akin to American football, but I can see it has appeal. Everything moves with the times and I can see this on the field sooner rather than later. It's OK having the latest technology, but it's what's inside the kit that counts."

As the Marines discovered when it came to Monday's humiliating scoreline.

Who knows, one day we may even see rugby players wearing actual rugby shirts.

the jersey wouldn't look too bad with some splashes of red, sponsors and logo(s). its the shorts...if they are anything near shorts that is
G

I Still prefer to wear a PROPER rugby shirt than something enhanced to make you ungrabable... all part of the fun of the game...
C

horse collar tackles are spectacular, but its banned
A

thats the problem with rugby, you guys are living in the past, the games moving foreward as is football, tight jerseys look better overall and they provide more of an advantage.. so why not go for those? because you want it to be old fashioned? Or are you talking about kits like irelands as "original rugby shirts" or those loose shirts that don't look very good, with the big collars? Rugby is progressing, and i guess so is the technology of the game, i don't have a problem with that at all.

now i dont know about those kits as seen above

If you remember the last world cup, those stupid tight shirts were constanly being torn in two because they're not up to the job. I can't remember saying the same thing about a propper shirt.
D

If you remember the last world cup, those stupid tight shirts were constanly being torn in two because they're not up to the job. I can't remember saying the same thing about a propper shirt.
[/b]
Click to expand...

yea but was that, the world cup, not the first time that the team used the tight fitting kit?

nike has made progression since then, and the shirts have undoubtedly gotten stronger.. it takes time to develop the product...

yea and you also saw a lot of shirt tackling with the propper shirt..
A

Nothing wrong with tugging on a shirt to tackle somone (in fact, it's one of my pet hates that footballers act like their leg has been cut off whenever there's some light shirt tugging).

However, there are some fitted shirts out there that aren't so bad... Namely the shirts made by Kooga and Samuari; Specialist rugby kit makers.

All the fitted kits by Nike and Adidas (and I own enough of the shitty things unfortunately) are **** and would be better suited to football (the propper one, not the stupid American thing) or, in the case of the Engand and France Nike shirts, Ballet.
D

yea its not getting tackled by a shirt thats the problem, its that if they are in fact tighter they can't do that, and you will own an advantage right there.

the future is in these (or kooga's they are nice) 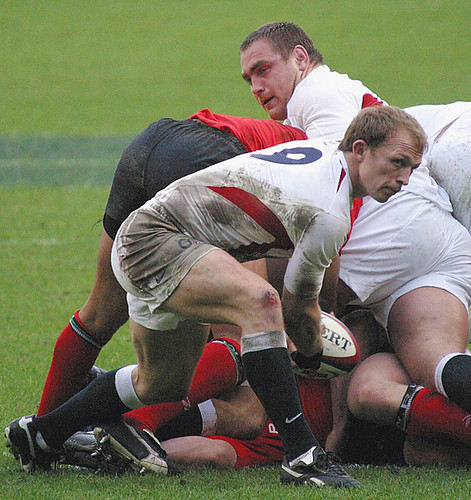 At the end of the day, a shirt cant make you a better skill player in rugby... but it can improve a good players chances of not getting tackled... it is far better to be playing rugby in Proper Rugby Shirts as it allows you to gain strength and break tackles, cos if someone is tackling you by grabbing the shirt and you can break that tackle, it means that if your playing in a proper game with tight fitted shirt you should nnot be having to break tackles... I suppose really its progression with sport, next thing we know we will all be playing rugby naked!!!
A

man, adidas's tights are cool! what u talkin bout teh mite!?
but yeh Kooga has got the best range indeed... after all, like wht charlie said... why dont we all just play rugby naked!
G

Proper Shirts are best for practising in tho... especially in wet weather, in makes you a far stronger more competitive player... also a better tackler, cos your more likely to get your man when your trying to get someone... I suppose really there are advantages and disadvantages to both...
C

those trouser looking things in the NFL are really just what original rugby shorts looked like in the 1870s to 1920s. maybe its like music where this retro trend comes back. but i digress. i absolutely love the type of jerseys that Cal use, or england for that matter. some players dont realy like tt tight restraining jersey, so they might opt for the more "traditional" look
D

caled im suprised you noticed those were cals' jersies i showed!
O

yea i think the pants look really gay, the shirts well they look like white undershirts.. just tighter, i can gaurantee they wont wear those pants things, just by looking at the pick.. if you look in the background one guy does appear to be wearing shorts however
C

i saw cal playing on cstv. not bad for an american varsity team. if im not wrong, uath wears the tight fitting jerseys too. is it just me, or is the guy in the background(in the nike pic) wearing shorts that dont look that tight, or is it just the shadows
O

Yeah, it looks like two of the guys, at least, are wearing decent shorts. If they don't want their players tackled, why don't they teach them to be better ruggers? Truth is, yes the game and equipment will always evolve, but retaining historical kit is part of what keeps the game trans-generational. I laughed when I first read the "what next, body paint," comment, but it's not far from reality. If they keep looking to the equipment to continually give an advantage, then the next progression is nude, greased men...try catching one of those (not that I ever have, nor am I casting judgement on you if that's the sort of thing you fancy on a sunday afternoon, except to say that your fairly questionable as a straight individual, no offense).