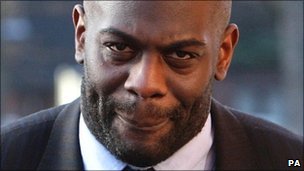 An ex-Premier League footballer told a court he was "really sorry" for headbutting and punching his girlfriend after an argument in a restaurant.

Former Bolton Wanderers striker Michael Ricketts had been celebrating his 32nd birthday when the row erupted in Amba Bar in Hale, Cheshire, in December.

Victim Nuala McEwan wrote to Trafford magistrates in his defence, claiming she intended her words to hurt him.

The court heard that the pair, who remain a couple, had been drinking when they began talking about past relationships.

Alan Pope, prosecuting, said Ricketts had accused Ms McEwan of being involved with someone else and she ordered a taxi to leave.
Click to expand...