Leinster and Munster clash this Friday in a repeat of their HEC semi final which should see a record attendance for a Magners League match with 14000 tickets already sold yesterday and upwards of 10000 more on top of that on the night.

Munster come to Dublin on the back of a 21-13 win over Ulster and see Frankie Sheehan return to the starting XV after he cried off late last weekend, good news with Barry Murphy making his return with a place on the bench, if he continues his performances like he put in against Sale then he's some serious prospect.

Leinster, who had to rely on 2 late tries to secure a bonus point at the Sportsground last week give season debuts to Malcolm O'Kelly and Gordon D'Arcy. Rob Kearney is on the bench after recovering from a hamstring problem while Cameron Jowitt makes the bench in his comeback from injury. 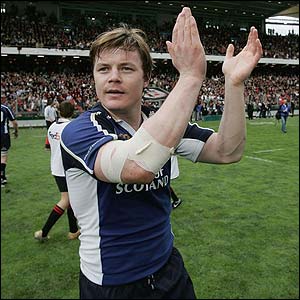 Lineouts should be crucial in this one, both have been misfiring so whoever tops that battle will go a long way to winning this match
O

Never really got it, just picked it as a username, took the Bull after John Hayes and just put it in Irish, just a personal preference but prefer the Irish.
O

It's nice...I like it. Did the same with my user name, only took the irish form of my surname.
A

Is that Rowland then?
O

Yeah...drop the D, because my family were illiterate or something: ROWLAN
A

So immigration didn't take it off you when you went to the States then,
O

essentially, yes. I think they were confused, because the English made them Spell it "Rowland" in the first place...then they pass through American Immigration and they didn't have a clue, and obviously the Irish that came to the US (my Great Great Grands) certainly were'nt coming on an academic scholarship. So there you have the flow and evolution of the name...some of our family do have the D.

Quite clever of you to figure O'Rothlain and Rowland, though. Good on you.
A

Bonus point win for Leinster 27-20 in front of a record league crowd of 27000+, 2 tries from BOD, 1 a piece from Horgan and Heaslip. Referee was card happy, rucking my ass against McCormack, Contepomi lucky not to be sent off, twice, although Donncha went down like a soccer prima donna the first time, quite pathetic performance from him throughout, acted like a little girl when Easterby gave him a shoeing as well. Munster lucky to get the bp though, Stringer took out Easterby for Wallace's try so that should have been wiped out.
A

Originally posted by RTÃ‰ Sport
Leinster managed to break the Magners League attendance record and Munster hearts in the process as they scrapped for a 27-20 victory at Lansdowne Road.

Ireland captain Brian O'Driscoll proved to be the game breaker in front of a 27,252-strong crowd, as he grabbed two tries with Shane Horgan and Jamie Heaslip also crossing the visitors' whitewash in a tempestuous affair.

Reprising memories of last April's Heineken Cup semi-final, dubbed 'Black Sunday' by the Leinster fans, the provinces tore into each other right from Felipe Contepomi's kick-off.


While David Wallace and Marcus Horan squeezed over for seven-pointers at the tail end of both halves, Leinster - thanks to their thorough defence and lightning quick attack - just had a slight edge on their southern foes.

However, Leinster were forced to dig deep for their eighth league win on the trot at Lansdowne Road, as they lost prop Ronan McCormack and fly-half Contepomi to two early sin-binnings.

McCormack, seeing yellow for the third time this season, walked in the fourth minute for reckless use of the boot on Munster captain Paul O'Connell.

The fired up nature of the game escalated in the 18th minute when Contepomi, who was being held off the ball by Donncha O'Callaghan, connected with a right hook on the Munster lock.

A red card then and who knows what might have happened but Leinster survived, tallying up 17 points without reply after Ronan O'Gara's early penalty strike.

O'Driscoll got his side on the march when he shrugged off the challenge of Jeremy Manning, Munster's makeshift full-back, to waltz in from the left for a 13th minute try.

Contepomi converted and after his cooling down, added the extras to Horgan's effort on the half hour, which had been made by a Denis Hickie incision.

The Puma's only penalty of the night pushed Leinster 17-3 in front before Munster, drawing on their strengths, dug out a power play in injury time.

Three times they shoved a scrum towards the hosts' line and, on the final push, flanker Wallace dived over in the left corner.

It was certainly game on with O'Gara's humdinger of a conversion leaving it 17-10.

Yet after doing so well to come back, Munster's hopes took a nosedive when they had prop Horan sin-binned within a minute of the restart.

Worse followed when numbers out left allowed O'Driscoll to dart in for his second try and a 22-10 Leinster lead.

O'Gara offered up a penalty in reply and Leinster ground their way to their second win in seven days with Contepomi's arching pass out to the right putting Heaslip over on 77 minutes.

There was still time for Horan to make use of a close range penalty and tee up a bonus point-clinching conversion for O'Gara, who duly obliged, although nothing was going to take the shine off Leinster's prized defeat of the European champions.
Click to expand...

Always intersting though how match reports fail to tell the entire story.
A

If anyone's interested here's the highlights from last night.

Simon McDowell is an awful, awful ref. I don't know how he missed Vermaas acting as a blocker for O'Kelly.

Good win for Leinster but the same thing happened this time last year and we all know how Leinster's season ended.