Does anyone know if this game is being televised?

It's not being televised in OZ unfortunately.
R

Last year when i`ve seen NZ Maori kicking Lions arses all over the field, smth puzzled me, there were less maoris that white players in the NZ Maori squad!
T


Yea it seems like anyone can claim they're Maori these days.
B

I reckon' if you said that to his face you'd get smashed.
It's about blood, not colour.
K

Also you would never guess Corey Flynn is maori..his mum is maori!!

So yes never judge a book by its cover.
G

Tony Brown is a former Maori/All black Player who looks more in his element with his new club in south Africa :lol: 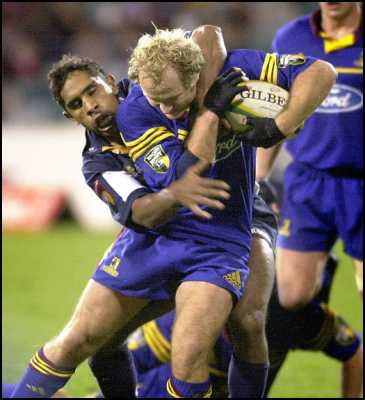 Can anyone imagine how confusing the discussion will become in another twenty years or so?

I'm sure they know who's from what bloodline, or whatever racial criteria you must fit to be a NZ Maori player. I'm happy that 9 times out of 10 they've done their homework.

I must say though, they are the finest segregated rugby team in the world! :bravo:

i dont know why people are using ***o as an example of someone thats not maori. yes he has red hair but ***O is a maori name???
to be included in the NZ Maori side you have to provide your Whakapapa which tracks you back to a maori ancestor. if you can do that then you can be included in the side.

i heard from the last coach Matt Te Pou on the radio and he said that Dan Carter was put forward by the NZRFU to play for the Maori's in the last 3-4 years but after he was checked by local Kaumatua he couldnt be traced back.

Paul ***o or Scott Linklader are prime examples of guys that look Pakeha(European) but have alot of Maori in them. theyre just more Pakeha than Maori i spose. then i use myself as an example, my surname is Davis, which is as bloody welsh as bread of heaven. yet if you took a look at me you could clearly see im Maori. brown skin, big nose etc....

unless your an expert in these players Whakapapa(geneoligy). i suggest you really dont know what your talking about....
E

yeah not much coverage of this game either on tv or radio it seems.
D

Originally posted by shiznit@Jun 2 2006, 01:52 PM
Paul ***o or Scott Linklader are prime examples of guys that look Pakeha(European) but have alot of Maori in them. theyre just more Pakeha than Maori i spose. then i use myself as an example, my surname is Davis, which is as bloody welsh as bread of heaven. yet if you took a look at me you could clearly see im Maori. brown skin, big nose etc....
Click to expand...

You wouldn't be from Kaphia would you?
M


In an inspired move by Maori captain Jonno Gibbes, he passed up two penalty shots at goal for lineouts before Mahoney plunged over from a 10-man rolling maul for the clincher.

The three tries to one victory was a dream start for new coach Donny Stevenson whose team only assembled this week en route to the Churchill Cup in the United States and Canada, and last night fielded six newcomers in the starting lineup.

The prospect of an open, flowing game was ruined by heavy rain which hit Sydney several hours before the match and strengthened soon after kickoff, reducing the pristine turf to a slippery mess and ensuring the pitch covers remained until kickoff.

Back play was a non-event, the scrums a shambles as both packs struggled to keep their feet, and lineouts often a free-for-all as hookers and locks struggled to grasp what was like a cake of soap.

The Maori clearly had more support among the drenched crowd of 7800, and despite the conditions they busted the game open with a wonderfully constructed seven-pointer in the 10th minute.

Waratahs fullback Peter Hewat added penalties in the 13th and 20th minutes but badly hooked a third just before halftime to leave the Maori 7-6 ahead at the break.

Some magic from young pivot Daniel Halangahu saw the hosts seize the lead five minutes after halftime when he carved between Tanerau Latimer and Thomas Waldrom 35m out and sent centre Ben Jacobs away near the posts.

No 8 Waldrom turned hero two minutes later when he scored the Maori's second try after a Corey Jane flykick, the ball squirted free and Waldrom dived on it to score to make it 13-12 to the hosts.

The Maori tore into the hosts and deserved to regain the lead from a 40m penalty to Bruce, but ill discipline hurt them as lock Kristian Ormsby was sinbinned for dangerous rucking and Filipo was penalised for a late and high tackle.

Hewat goaled from the latter offence to make it 16-15 and set up a thrilling final 15 minutes.

Glad the back up boys for NSW were able to fight this one to the end... The Maori's are no push over... Just ask the Lions!
R

But the team that faced the Lions was full strength in every sense.
K

It's a shame it wasnt on tv , would have been a damn good game to watch!!
K

Originally posted by Ripper@Jun 3 2006, 01:44 PM
But the team that faced the Lions was full strength in every sense.
Click to expand...

And so it bloody should have been! They were playing the Lions, this time they were playing a very Tahs outfit without any of it's big guns, so I'm glad they made a fight out of it!
K

Bahaha i laughed soo much at Pehi Te Whare on the news about the weather in sydney "its just like back in invercargill aye!!" bahaha, atleast we got on the news for something