Shane Warne looks like he's overcome an elbow injury as he goes in search of his 700th test wicket.

England again have 3 question marks over whether Giles, Jones and Anderson will keep their place with Panesar, Mahmood and Read all waiting in the wings, what odds on only 1 change though.
B

I read somewhere that they are expecting the Perth wicket to take some turn- WTF????

From what I recall, Perth always had the greenest of green tops, even last year when SA played there, it took diddly squat turn even on day 5- evidence of this is that SA actually saved the match batting for 120-odd overs on the 5th day against Warne. Any comments wrt how the wicket has really been playing this season, or are the Aussies just playing mind-games again?

Wrt the England side`s make-up, I reckon everyone knows exactly where I stand on thie matter of Panesar, Read and Mahmood, especially now since Eng can ill afford to play conservatively from a position of 2-0 down.

Also read somewhere that Mike Hussey will step up to fill the no4 slot vacated by Martyn, and that Symonds will get the nod at 6- personally I would`ve just moved everybody up the order, and given Johnson a game- the lad really looks like the business to me, and Aus seems to have a stranglehold on the current English attack anyway.
A

and Symonds doesn't exactly have the best test record so it does seem a slightly strange call.
B

I actually reckon Symonds is more of an ODI type player- a bits-and-pieces cricketer really, can bat a bit and bowl a bit- not really a specialist of either, and not good enough to hold down a regular test spot for the Aussies as either a batsmen or a bowler.

Yes you`re right An Tarbh, his record speaks for itself- 10 matches, 15 innings, 286 runs at 19.06 average with a top score of 72- Warney`s batting stats are much better than that.

i doubt fletcher will make any changes, perth is probably the greenest pitch we will play on in this tour so giles will probably get the nod ahead of panesar again because of his 'control' which is a crap reason because monty has control and actually looks like he might occaisionally take a wicket unlike giles!

I read somewhere that they are expecting the Perth wicket to take some turn- WTF????

From what I recall, Perth always had the greenest of green tops, even last year when SA played there, it took diddly squat turn even on day 5- evidence of this is that SA actually saved the match batting for 120-odd overs on the 5th day against Warne. Any comments wrt how the wicket has really been playing this season, or are the Aussies just playing mind-games again?
[/b]
Click to expand...

Historically the WACA pitch has been regarded as the quickest and bounciest wicket in the world.... a fast bowlers paradise.(not a speck of green)

Over the last two years it has developed into a spinners pitch as it has flattened out and become more batsmen friendly.

It's quite sad really, alot of the pitches in Australia seem to be losing their distinctive traits.

With England batsmen publicly stating surprise at the lack of pace in Australian pitches, the number four deck at Perth's WACA Ground is about to become the most talked about piece of real estate in Australia.

Long regarded as the quickest and bounciest surface in the world, the WACA has more recently been a place where batsmen and slow bowlers prosper, and quicks are made to toil.


And despite WACA curator Cameron Sutherland stating his intention to inject more juice into the surface ahead of Thursday's third Ashes Test, those who have seen it up close say pace bowlers from both sides looking for some help in the west may be disappointed.

England opener Alastair Cook, who hit a century at the WACA during this weekend's tour match against WA, said he felt pitches in England were now quicker than in Australia.

"The (second Test) Adelaide one was very slow. You hear everything about coming to Australia and the bouncy wickets, but the bounciest wickets I've played on in my career so far have all been in England," Cook said.

"It's been surprising. The WACA one on the first day looked quite quick and the nets are quite lively, so I don't know what's going to happen on the wicket this week.

"But (generally) it has been slightly surprising, the lack of pace in them."

The changing nature of the WACA pitch has been illustrated no more starkly than in the success rate for WA's fast and slow bowlers this year.

Young left-armer Aaron Heal has taken 17 wickets in his three games, including two scalps against England, and Brad Hogg claimed six in an innings against Queensland.

Former WA great Terry Alderman this week blamed the modern WACA wickets for the poor form of WA's current crop of fast bowlers, saying their spirits had been broken by a lack of pace and carry.

And former England wicketkeeper batsman Alec Stewart said on his viewing since arriving in Australia, England may plump for two slow bowlers on Thursday - a ploy Australian rued not using against South Africa in the drawn Test in Perth last year.

"I was only down there for a few hours yesterday at the WACA, but I saw a little bit of turn, and talking to some of the WA boys they have said this year it has spun," Stewart said.

"I wouldn't discount England playing two spinners. The two of them (Ashley Giles and Monty Panesar) can work well in tandem, because they are different types of bowlers."

It is 20 years since England last did that in Perth, when John Emburey and Phil Edmonds paired up in 1986, bowling almost 120 overs between them for six wickets.

Emburey, who is due to play in a Legends Twenty-20 game at the WACA on Tuesday, says he remembers lots of runs and big cracks in that pitch - but said England should consider the option if the pitch warrants it.

"It is certainly not (unprecedented), and if we are struggling - there is no reason two spinners can't play," Emburey said.[/b]
Click to expand...

-Australia has won the toss and elected to bat

-Symonds comes in for Martyn

-Monty and Mahmood replace Anderson and Giles
[/b]
Click to expand...

Great start for England with Hayden out LBW and Harmison picking up the key wicket of Ponting.

There's plenty in this wicket for the bowlers, i think Punters decision to bat might have been a bad one.
T

TIME TO BUY FLETCHER A 'WHAT COULD HAVE BEEN' SHIRT
T

T'was a truly terrible defensive shot by Langer but great to see Monty so excited jumping around.

I'd love to see this series still alive for the Boxing day test, hopefully the inclusion of Monty gives the the poms the spark they need to make a contest out of this series.
P

Best. E-mail. To. Test Match Special. About. Monty. Ever!

You could equip the Aussie fans with bloody megaphones, and yet no amount of even the worse and simply wrong sledging could dent the enthusiasm of Mr. Panesar.

Truly, the ultimate eccentric Brit
A

Jesus Fletcher really deserves a smack of a cricket bat, and Flintoff to a certain extent, for not picking Monty or Mahmood for that matter, from what I've seen of him after tea, he's certainly offering more than Anderson, can't comment on the first 2 sessions, although he needs to make an adjustment to avoid being warned again.
P

I think the pair of them have taken to the rough world of Ashes cricket like ducks to water.

Panesar because any sledging of any kind just bounces off of him because he's always in his own little happy world (does he take LSD in his tea or something?) and Mahmood's just a gritty cricketer, I mean after all, he is top class boxer Amir Khan's cousin

AND I HEAR THE TRUMPETER! At last! Prudish Aussie political correctness has been overcome! Shine on you diamond!
A

lol. as long as he doesn't start on the Great Escape.
P

Haha no no, he was a total highlight of the last Ashes, he'd always open with a total US Cavalry bugle call before just randomly playing YESSS! YOU BEUTTT! COME ON MONTY!!!

(Sorry, Brett Lee out for 10 by Monty Panesar while I was typing this)

...*ahem* anyway, the bugler always plays Land of Hope and Glory, Jerusalem and some other random stuff but he's not an England Soccer trumpeter, no way. The guy actually plays trumpet freelance for various orchestras. Like right now he's helping out smaller Australian orchestras right now between test matches.

edit: And we have a photo of the man! Obviously public enemy number one according to the Aussie authorities who got the police to escort the guy out in the last test match! 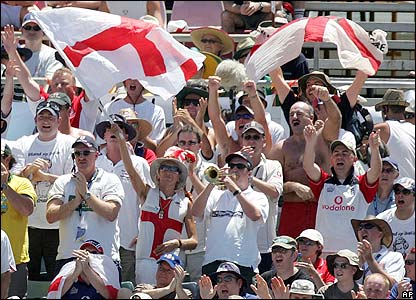 Well, what a day for Monty, everything seems to be going his way and his inclusion has brought some life back into this English sqaud..... Harmison almost looks like a bowler again .... almost.

Poor old Hussey has run out mates again, he cant buy a 100 atm..... another good not out innings should continue to raise his average yet again to something ridiculously bradman'esque.

Australia all out for 244, hugely frustrating for Hussey to be left stuck on 74no, think it'll be quite frustrating for the Aussies that so many batsmen got off to decent starts.

Awful decision though to give McGrath out.

Great bowling from Monty to get the five wicket haul, surprised that Warne doesn't have one though, could change pretty quickly though.

Even more importantly for England though is the form of Harmison, great performance and even better figures as well.
P

However, I'm terrified now of what Shane Warne can do. Panesar is merely a highly talented padawan...god knows what a fully fledged Sith Master will be able to acheive!